Rekindling My Love of Astronomy

I was born in the South Bronx. My parents each had two jobs, so we as kids were pretty much on our own. Saturday mornings my mother gave me fifty cents, pinned a label inside my coat with my name, address and telephone number. “If you get lost, ask a cop for directions.”

My friend Gary and I would take the subway, which was 10 cents, and travel all over the city. Transfers were free. We would take the Staten Island ferry for a nickel, go to the Bronx Zoo, it was free, or the Botanical Gardens, also free.

But our favorite destination was the Hayden planetarium and the Museum of Natural History, also free. We’d weigh ourselves on scales calibrated to how much we’d weigh on several of the planets and the moon. We’d exam giant meteorites, and wonder at the latest missiles sent aloft during the formative years of artificial satellites such as Explorer I.

Of course the sky show in the domed theater was the biggest attraction and for two kids whose imaginations were as infinite as space that was the hit of the day.

Before leaving the planetarium a visit to the gift shop was also a must. If we purchased anything on our limited budget, it was a giant postcard with images of Saturn and Jupiter, always a winner on Monday’s show and tell in our public school classroom.

Another of my friends received, for his 11th birthday, a three inch reflector telescope. Now that was a big deal. One evening we carried it to the rooftop of his apartment building and observed the moon. What a thrill!

Talk about imaginations as infinite as space. While observing the moon, it appeared as though something was heading toward it. It had a trail like the exhaust of a rocket ship. And then, it appeared as though it went behind the moon and reappeared on the opposite side. We thought we had made some extraordinary discovery. We ran downstairs to my friend’s apartment and (at 10 o’clock at night) called the Hayden Planetarium, excitedly telling the person who answered the phone of our great discovery. He replied, “I’m only the night watchman.”

So much for our great discovery.

In 1967, I was doing research for CBS News, the Special Events Unit. We we’re covering the launch of Apollo 8. The executive producer approached me and in an off-handed manner said, “See if you can find a sculpted globe of the moon. We’ll use it as a prop.”

It seemed a slight chance. I called several agencies in the Soviet Union. Hey, it was on CBS’s dime. I knew they had the first images of the far side of the moon and thought someone might have had the same idea, sculpting a model of the moon. Nyet, nyet and more nyets.

After speaking with folks at space agencies in Europe and having no luck, a colleague suggested I call Dr. Thomas Nicholson, an astronomer at the Hayden Planetarium, who later became its director. “Sure, there are two guys in the Bronx who just finished sculpting a model of the moon.”

What an extraordinary find. Graciously, they allowed us to use their sculpted moon (1,000,000:1) in inches. Every rill and crater, straight wall. It was all there.

We invited Dr. Nicholson to come to our studio and assist the lighting director. The moon was lit to duplicate how the astronauts would see it on their approach.

I would say that entire experience rekindled my love of astronomy. 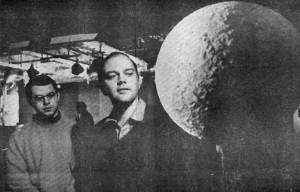 Me, the young guy, with Robert Wussler the Executive Producer, The Flight of Apollo 8

This entry was posted in May 2020, Sidereal Times and tagged kaplan. Bookmark the permalink.