On a recent vacation to Arizona, the Grand Canyon state, I had the opportunity to visit Biosphere 2, near Tucson. It is a futuristic looking structure containing a sample of ecosystems found on Earth. Used currently for conducting experiments on the impact of climate change on an accelerated timescale, it was once a habitat for a voluntary group of people who lived in its sealed premises for two years from 1991 to 1993, as part of an experiment on the sustainability of life in such a closed, and scaled down ecosystem.

My first curiosity was why Biosphere 2 ? Where is Biosphere 1 ? I found that our planet Earth is Biosphere 1. The giant set of ecosystems sustaining life all around us. Millions or billions of members within each of the millions of species. It remains in harmony but for some extinctions from time to time, some as part of nature, and some forced upon by an intelligent specie called Homo Sapiens or the human beings. Other than quick experiments which can be done to predict how Biosphere 1 will behave in future, Biosphere 2 also serves as a laboratory for habitats which need to be setup in mankind’s quest for colonizing planets or moons in the future. To test the viability of different life support systems.

I recently read the book titled “The Human Experiment” by Jane Poynter who was one of the Biosphere residents for two years. An interesting experience and some interesting observations. I am not sure if I would give up two years of my life to stay in such seclusion, but this team did endure a lot to become the guinea pigs. There were some controversies regarding the experiment itself, but overall, it was more than a glass half full kind of scenario.

The Biosphere 2 was financed in its entirety of a quarter million dollars by Ed Bass, a Texas billionaire who is labelled as an ecopreneur, an entrepreneur who deals with ecological ventures. Putting his inherited wealth to good use, he contributed immensely towards the study of ecosystems. Covering an area of little more than three acres, it was architected as a series of space frame based structures. Space frame is a mesh of lightweight metallic bars, interspersed by glass. Double panes of glass sandwiching a shatter-resistant plastic film. It was constructed as the tightest building on the Earth. Once sealed, the atmosphere could not escape into Biosphere 1, nor anything could get in. It was tighter than the space shuttle. An engineering marvel in support of science! The pictures below were taken from my iPad pro. 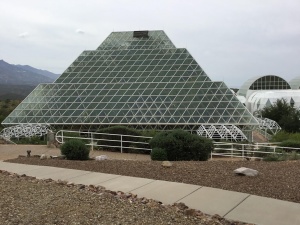 The entire complex contains a habitat, a rainforest, a savannah, a desert, a marsh, an ocean, and some land for agriculture. The habitat contains living quarters for the inhabitants. Agricultural land is for growing crops for sustaining life within the sealed system. The ecosystems have been built with great care by importing the plant and live species from around the world. There are lot of equipment in the basement to control the environment in different parts of the Biosphere 2. The vast gamut of machinery is dubbed as Technosphere. There are sensors placed all over the Biosphere 2 which feed into the Technosphere below.

Once the Biosphere 2 is sealed, the pressure inside would fluctuate wildly as changing temperatures caused by changing seasons and the sunlight falling through the glass, causing the air inside to expand and contract. The Biosphere 2 needs lungs to breathe. For the Biosphere’s lungs, a round steel chamber the size of a large ice rink with a neoprene roof, was attached to the side of the Biosphere. The flexible ceiling would act like a bladder, rising as the pressure increased, and sagging as the pressure lowered. I could not think of such a need or a contraption earlier.
The team which lived inside for two years, prepared for a life in seclusion. First by being on a boat in the middle of Indian ocean for a month or so. And then staying in the Australian outback for about a year. Far from any civilization or its conveniences, it was similar to how small groups of people live in space like the Russian Space Station Mir or the International Space Station. Or in the research labs in Antarctica. Although they did all the chores like growing food, cooking, cleaning, recycling, operating the machinery by themselves, they did have gadgets for cooking, laundry etc.

The team grew starchy foods like white potatoes, sweet potatoes, rice, wheat sorghum etc. The variety in crops made the land use sustainable. No fertilizers or chemicals were used as they could contaminate the atmosphere and could make life unbearable. They were constrained in the amount of meat they could eat. They started with some livestock and nothing else could come from outside. The cattle had to multiply before being slaughtered for meat. The inhabitants had to grow all the food for their needs. As a result, they became skinny, often craving for all the nice food which the waving visitors were eating beyond the glass walls. There were some conflicts within different members of the group from time to time. It is to be expected from a small isolated group of people living together for extended periods of time. A simplistic lifestyle reminiscent of our forefathers! The experiment resulted in some species becoming extinct, which was to be expected, and more importantly proved that human beings could live.

There were a couple of occasions when there had to be an external intervention. Jane Poynter cut her finger very badly to the extent of dismembering. One of the inhabitants was a doctor. He could not do much. She had to be carried out to a hospital. She was back after a few hours. Second time was the reduction in levels of oxygen. It was later found to have been caused by concrete, which breathes in oxygen long after its curing is over. Oxygen was pumped from outside to make up for the loss. Other than these incidents, there was near perfect isolation.

There are enclosed systems like rainforests in other parts of the world like Gardens by the Bay in Singapore, but such a diverse set of ecosystems, along with life support systems all under one roof is really unique. Biosphere 2 is not sealed anymore, there are no more human experiments, only ecology related experiments conducted by visiting scientists. Administered by the University of Arizona, it is an excellent science facility which tourists can find very interesting.

This entry was posted in October 2017, Sidereal Times and tagged biosphere, ganti. Bookmark the permalink.