The Cycle of Eclipses

Many of my fellow AAAP members will have heard of the “saros”: the 18 years, 11 and one-third day cycle when eclipses of the sun and moon recur with nearly the same circumstances. To be more precise, the cycle lasts 6,585.3211 days. The reason that eclipses recur like this is that in this period there will have been 223 synodic months (new moons or full moons), 239 anomalistic months (returns of the moon to its perigee or apogee, its closest or farthest distance to earth), and 242 draconic months (returns of the moon to a particular one of its nodes, the two points where its path crosses the ecliptic every month and eclipses can happen if the sun is nearby.

This cycle was known to ancient skywatchers; the word “saros” is derived from the Sumerian “shar,” meaning “multitude” or “large number.” Its usefulness lies in the fact that if you see an eclipse of the sun or moon of a particular kind, i.e. total or partial and lasting a certain length of time, there will be a similar one 18 years, 11 and one-third days later.

Therein lies two difficulties. The major one is that in the extra one-third of a day, the earth will have rotated 120 degrees of longitude eastward from where you were the first time. In the case of a lunar eclipse, these are visible over such a large area that you might be lucky enough to see both of them without having to travel. In the case of a solar eclipse, as we all know, these are only total or annular in a very restricted path, but there is still a significant area where one can see at least a partial eclipse.

If one is patient enough to wait three whole saroses (a so-called “triple saros” or 54 years and about 31 days depending on how many leap years intervened), the same kind of eclipse will come back to roughly the same part of the earth where you were the first time. However, because of the extra days, the earth will now be in a different part of its slightly elliptical orbit and a different distance from the sun. The sun will also be at a different altitude, if visible at all. So if it’s a solar eclipse, the path will not be exactly where it was before and the duration will not be the same. However, in most cases you will still see something similar, if you are not clouded out.

I have been lucky enough to have seen several solar eclipses of about the same character separated by these intervals. The attached images, taken from https://eclipse.gsfc.nasa.gov/SEpubs/5MCSE.html (Espenak and Meeus, public domain), show these eclipse paths. I have added red dots to show where I was when these eclipses happened.

The individual saros series are in the upper left. If the series number is the same, then these two eclipses are in the same individual series but separated by one or more 18 + year intervals. A series starts with a small partial eclipse near the north or south pole and slowly progresses southward or northward until no more eclipses take place in that series. The only solar eclipse series currently active are those numbered from 117 to 156; the others occurred before or will occur after the 5000-year period of the maps. 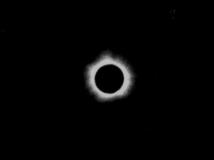 The “x’s” in the diagrams are the subsolar points (where the sun is in the zenith) at the time and place of maximum eclipse, which is shown by an 8-pointed star. The Earth is oriented to show the full eclipse path, with the subsolar point always on the “meridian.” The dotted lines are where there is a 50% partial eclipse.

The first eclipse of which I have any reliable memory was the annular one of 1951. In Virginia, my father and I got up before sunrise and went to a park where we might have seen the annular phase. However, it was cloudy. Later on it did clear up and we saw a large partial eclipse.

The next one was in 1954, which was total farther north, and it was clear in the morning. We did see something like a 70% eclipse, which was still quite nice. I could not know then that in 1972 I and my growing family would see the next one in the series in New Brunswick, Canada as a fine total eclipse through high thin clouds. The one in 1954 was near the beginning of its track and the one in 1972 was near the end of its track, which made it possible to see both of these from the eastern part of North America despite the 120-degree turn in the earth mentioned earlier for two eclipses separated by one saros.

The first total I ever saw was at Old Point Comfort, Virginia, in March 1970 in a clear sky. One “triple saros” after this, there will be the eclipse of April 2024. I hope to be lucky enough to see this one as a total also, to complete one full triple cycle of totals.

In between these two was the large partial one in 1963 when I was a graduate student in Wisconsin. Again, I had no idea that I would see it as a superb total this August in Oregon with a group of club members. In a sense, this does complete a triple saros, but without having seen them both of them as totals.

Two other eclipses of memory were the annular (but nearly total) one of 1984 and the annular of 1994. I and my two sons were in Virginia in the central path in 1984 but were clouded out of the central phase. (Later on, of course, it cleared up.) The notable thing about this eclipse was how it suddenly got very dark for a few seconds and then as suddenly lightened up again. The cattle in a neighboring field were startled and vocalized.

In 1994, my workplace in Piscataway took a break around lunchtime on a Tuesday and we were treated to a very large partial. Some AAAP members may have seen this as a long-duration annular elsewhere. If so, it would be interesting to hear their stories about it, or about other totals that they may have observed.

This entry was posted in October 2017, Sidereal Times and tagged church, eclipse, saros. Bookmark the permalink.