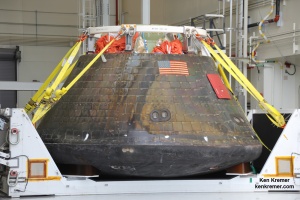 View of NASA’s first Orion spacecraft after returning to the Kennedy Space Center in Florida on Dec. 19, 2014           Credit: Ken Kremer

KENNEDY SPACE CENTER, FL – After a history making journey of more than 66,000 miles through space, ocean splashdown and a 2700-mile cross country journey through the backwoods of America, NASA’s pathfinding Orion crew capsule was returned to its home base at the Kennedy Space Center in Florida just before Christmas.  I was on hand to witness the event.

“The Orion mission was a spectacular success,” said Jules Schneider, Lockheed Martin Program Manager for Orion at KSC, during the arrival on Dec. 19, 2014. “We achieved 85 of 87 test objectives,” noted Schneider. “Only an uprighting air bag did not deploy fully after splashdown. And we are looking into that. Otherwise the mission went extremely well.” Lockheed Martin is the Orion prime contractor.

Orion flew on its two orbit, 4.5 hour maiden test flight on the Exploration Flight Test-1 (EFT-1) mission that started NASA’s long road to send astronauts beyond Earth and eventually to Mars in the 2030s.

Along with others, I was able to see the entire Orion capsule from top to bottom, including the exposed, blackened and heat scorched heat-shield which had to protect the vehicle from fiery re-entry temperatures exceeding 4000 F (2200 C).

One of the main objectives was to test the heat-shield during the high-speed atmospheric plummet at about 20,000 mph (32000 km/h) that reached approximately 85% of what astronauts will experience during a return from future voyages to Mars and Asteroids in the next decade and beyond. Engineers took three samples from the 16.5 foot diameter heat shield for analysis.

“The heat shield performed very well and did its job,” Schneider told me. “All of Orion’s system performed very well. And the capsule used only about 90 pounds of its about 300 pounds of hydrazine propellant stored on board. All of the separation events went beautifully and basically required virtually no maneuvering fuel to control the attitude of the capsule. The expected usage was perhaps about 150 pounds.”

Orion’s test flight began with a flawless launch on Dec. 5 as it roared to orbit atop a United Launch Alliance Delta IV Heavy rocket – the world’s most powerful booster – at 7:05 a.m. EST from Cape Canaveral Air Force Station in Florida.

The unpiloted test flight of Orion on the EFT-1 mission ignited NASA’s roadmap to send humans to Mars by the 2030s by carrying the capsule farther away from Earth than any spacecraft designed for astronauts has traveled in more than four decades. Humans have not ventured beyond low Earth orbit since the launch of Apollo 17 on NASA’s final moon landing mission on Dec. 7, 1972.

This entry was posted in March 2015, Sidereal Times and tagged kremer, Orion. Bookmark the permalink.