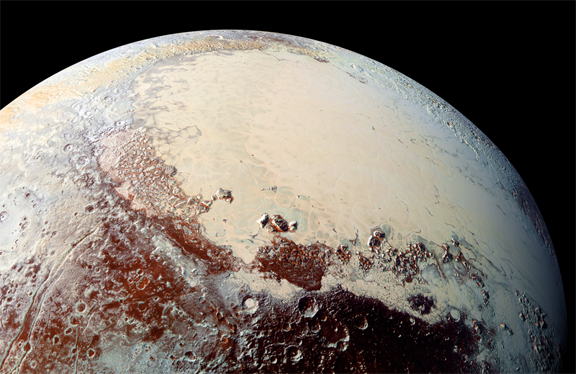 What We’ve Learned About Pluto
The story of Pluto is largely a story of ice. On Earth, the only ice is frozen water. On Pluto, nitrogen, methane and carbon monoxide also freeze solid. The most striking feature that NASA’s New Horizons spacecraft saw when it flew past Pluto last July was a heart-shape region now named Tombaugh Regio after Clyde Tombaugh, the discoverer of Pluto. The left half is covered by mostly nitrogen snow; the right side is more methane ice.

Dawn spies new detail in Ceres’ bright spot
The US space agency’s Dawn satellite continues to return remarkable images from the dwarf planet Ceres, in particular from its collection of bright spots in Occator Crater.

Project Greenglow and the battle with gravity
Scientists are debating whether it’s possible to harness the power of gravity for interstellar space travel.

Hubble telescope spies stellar ‘land of giants’
Astronomers use the Hubble Space Telescope to investigate a clutch of monster stars on the edge of our Milky Way Galaxy.

A ‘Tail’ of Two Comets
Two comets that will safely fly past Earth later this month may have more in common than their intriguingly similar orbits.

Mars Mission Blasts Off From Kazakhstan
The ExoMars spacecraft consists of an orbiter that will measure methane and other gases in the Martian atmosphere and a lander that will study dust storms.

NASA Targets May 2018 Launch of Mars InSight Mission
NASA’s InSight mission to study the deep interior of Mars is targeting a new launch window that begins May 5, 2018.

Watching the heavens: The female pioneers of science
Why the forgotten women of astronomy are being celebrated 100 years on.

Ten Years of Discovery by Mars Reconnaissance Orbiter
True to its purpose, the big NASA spacecraft that began orbiting Mars a decade ago this week has delivered huge advances in knowledge about the Red Planet.

Dark Mercury’s ‘pencil lead crust’ revealed
The planet Mercury may once have been encased in an outer shell of graphite, the same material used as pencil lead.

Versatile Instrument to Scout for Kuiper Belt Objects
The CHIMERA instrument at the Palomar Observatory near San Diego is using hi-tech cameras to locate near-Earth asteroids and objects in the Kuiper Belt.

Radio flash tracked to faraway galaxy
Astronomers pinpoint the source of an explosive ‘fast radio burst’ for the very first time, and use it to measure the density of the cosmos.

5 Ancient Sites Built to Align with the Spring Equinox
Architecture that works with astronomy.

This entry was posted in March 2016, Sidereal Times and tagged kaplan, snippets, wright. Bookmark the permalink.