A Watchtower in Space

Very recently, a SpaceX Falcon 9 rocket took off into space with a payload. The launch was routine but the payload was something special. It carried a satellite called DSCOVR (Deep Space Climate Observatory). The observatory will take about a hundred days to reach its parking spot which is about a million miles from Earth.

The main mission of the satellite is to watch space weather and report back to Earth. Specifically, it will watch for a torrent of charged particles coming from the Sun towards the Earth, that has the potential to disrupt communications, computers and the power systems on the Earth and electronics in the satellites and the spacecraft near the Earth. The observatory can give advanced warning that such a gusher of charged particles is on its way so that precautionary measures can be taken.

The Sun is a huge nuclear fusion reactor fusing hydrogen together to form helium and held in balance by the collapsing gravitational forces caused by the huge mass and the nuclear forces trying to rip it apart. In the bargain, we get all the heat and light that sustains life on the Earth. The Sun also holds the entire solar system consisting of the planets and their satellites in orbit. This nuclear furnace has gone on for about five billion years since it started and will last for another five billion years until its hydrogen supply will be mostly exhausted.

Due to the hot nuclear reactions, the Sun is a very violent place in the Solar System. At such temperatures, matter exists not as a solid, liquid or a gas, but a fourth state called plasma. Essentially it is a soup of charged particles like protons and electrons not bound to each other. All these interactions result in cyclical solar flares, some minor and some major, much akin to tides and ocean tsunami.

Fortunately for us, Earth has a magnetic field surrounding it. This field results from a hot metallic core consisting of liquid iron and nickel at the center of the Earth. The magnetic field does an excellent job of keeping away the charged particles coming from the Sun but only partially. If the solar flare is very intense, the protection breaks down. It has happened in the past in 1859 during the Carrington Event, which set telegraph wires on fire. Now the Earth is a much more technologically sophisticated place, and the human race has a lot of investment and dependency to lose. Much more is at stake now than ever before in human history. Any early warning system, like our weather prediction system, will be helpful. That is the job that this observatory will be performing. 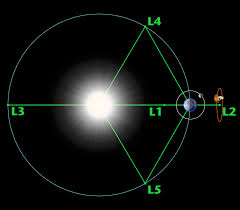 The observatory has secondary duties of monitoring the climate on the Earth. Beaming back data about ozone and aerosol amounts, cloud height, ultraviolet radiation and other information gathered by its cameras. The observatory is scheduled to last for two years, but it may last longer because it has fuel for five years. I am sure there will be something else after the lifetime of this observatory. Something else to warn us in the future. Something else for me to write about! Certainly, we are living in exciting times!

This entry was posted in March 2015, Sidereal Times and tagged ganti, watch tower. Bookmark the permalink.