Astrophotography was revolutionized by digital techniques over the past 20 years. Steve Mazlin will explain some of the basics of data acquisition and processing while giving a glimpse into the world of remote imaging and showing some of his favorite images. 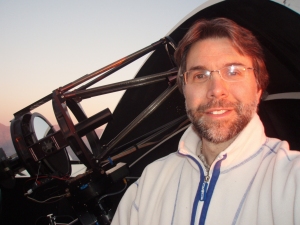 His colorful images have appeared in numerous magazines and on NASA’s Astronomy Picture of the Day (APOD) website. In 2009, he had a one man show at the Monmouth Museum in Lincroft, NJ. Some of his images are part of the traveling exhibit, “Starstruck: The Fine Art of Astrophotography”, coming to the Michener Museum in Doylestown, PA this November.

Steve Mazlin lives in eastern Pennsylvania with his wife, Violet, and his 2 sons. When not actually acquiring or processing astronomical images, he’s usually thinking about acquiring or processing images. Somehow he finds time for his other familial responsibilities (though Violet may argue this point), and time to be a neurologist in a busy private practice. His personal website is www.fourthdimensionastroimaging.com. His alter ego, Mazlini The Great, can be found at www.youtube.com/watch?v=eShOLJJnlLs.

This entry was posted in November 2014, Sidereal Times and tagged mazlin, meeting, speaker. Bookmark the permalink.