My Respects to Fred Hoyle

One of the human weakness is to get carried away with the negatives associated with a human being and not make a balanced assessment of one’s capabilities. Something similar happened to Fred Hoyle, the great astrophysicist. He backed the wrong horse called “Steady State theory” and opposed an alternate theory, which was derisively called “The Big Bang theory”.  The name stuck and later evidence in form of background cosmic radiation proved the Big Bang Theory correct. 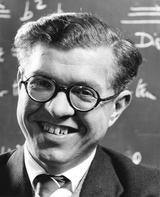 In addition to a bad bet, his taking of politically unpopular positions went against him. As a result, his most notable achievement called “nucleosynthesis” in which he explained the formation of all the elements heavier than helium through nuclear reactions in stars and in supernovae, fetched a Nobel physics prize for his colleagues but not for him. There have been cases where other scientists were proved wrong in their theories, but Hoyle paid a heavy price for his stance. He became a pariah. In his case, I  want to see the glass as half full, not as half empty. On his count,  I respect Hoyle for his immense contribution to nucleosynthesis.

Fred Hoyle, along with his colleagues Thomas Gold and Herman Bondi saw a ghost movie in 1945 called “Dead of Night”,which did not have a beginning or an end. Based on this idea, Hoyle named his theory of the Universe the “Steady State Theory”, meaning that the Universe always existed without a beginning or an end. It fit well with the religious belief of God’s creation of the Universe. A rival Big Bang Theory gained credence with the discovery of the expansion of the Universe by Edwin Hubble. Hubble theorized that if we run the expanding Universe backwards, it will collapse into a point. The Universe is supposed to have been born from this single point through a big bang. The prediction of background microwave radiation and its subsequent discovery by Penzias and Wilson proved the theory right. After this discovery, Hoyle conceded that he was wrong about his Steady State Theory.

Hoyle took a stand against the award of the Nobel physics prize in 1974 for the discovery of pulsars. The Nobel committee ignored Jocelyn Bell for the award. Hoyle felt that Bell contributed significantly to the discovery and deserved the prize.

Let us look at Hoyle’s work in little more detail. In the first half of the twentieth century, there were a couple of prevailing questions in cosmology. The Universe started with a big bang and soon after hydrogen formed. It is the simplest and lightest of all the elements. Even today, hydrogen is the most abundant element in the Universe though not on Earth. How did elements heavier than hydrogen get formed ? Secondly, what powers the stars ?

Arthur Eddington speculated that the stars, including our own Sun, may be powered by nuclear energy. He observed that helium weighed slightly less than four atoms of hydrogen. He speculated that the fusion of hydrogen must result in helium, and the rest of the mass must be converted to energy according to Einstein’s famous equation e=mc². Hans Bethe came up with the details behind this fusion reaction. He also concluded that elements higher than helium cannot be created in the stars. Temperatures of billions of degrees are required for such a process, whereas a star only has millions of degrees.

Hoyle came up with an explanation of how stars can cook up all the elements heavier than helium. Hoyle predicted an unstable form of carbon as a stepping stone to produce heavier elements up to iron in stars. This form of carbon has been recreated in labs. Hoyle found that as elements grow larger, the repulsive force between their positively charged nuclei makes it increasingly difficult to squeeze them together. Iron, element number twenty six, is the last element of the periodic table whose creation via fusing two smaller nuclei releases energy. Fusing two atoms of iron requires energy, rather than releasing energy. “Iron peak” is a critical juncture in the way stars make elements. Hoyle said that supernova bursts may generate such temperatures required for fusion of elements higher than iron. 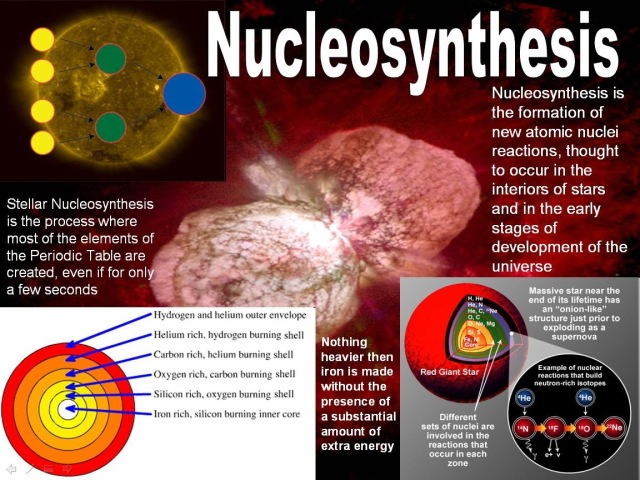 Hoyle proved that the death of a star did not mark the end of the nucleosynthesis process. One generation of stars cook lighter elements and feed second generation of stars and so on. Our own Sun is a third generation star. As a first generation star exhausts its hydrogen, it contracts and heats up, and the helium starts its nuclear burn, forming carbon and oxygen. This sets the stage for the alpha process, when massive stars’ cores burn carbon and oxygen, forming the elements from neon to sulfur.

It is true that the carbon which forms the bulk of our bodies was once cooked in a star in the Universe. A supernova would have produced the precious metals like silver, platinum, and gold which human beings on Earth crave for. For all of Hoyle’s great work, the 1983 Nobel prize for nucleosynthesis included Hans Bethe, but not Hoyle. I am not protesting the Nobel award. I just feel philosophic about Hoyle not being recognized. I am trying to do my part here by offering my respects.

This entry was posted in February 2014 and tagged ganti, hoyle, nucleosynthesis, steady state. Bookmark the permalink.

1 Response to My Respects to Fred Hoyle