Spring Comes to AAAP
Beware the Ides of March? The words invoke a sense of unseen danger even today. Back in the latter days of the Roman Republic, Julius Caesar (in 44 BC) was forewarned by a seer that harm would come to him not later than the Ides of March. The prophecy came to pass and drastically changed the world. I somehow missed seeing Shakespeare’s “Julius Caesar” where the famous line is spoken, but met his heir Octavius in “Antony and Cleopatra” at McCarter Theatre a few years ago. At the time the Roman calendar was based on moon phases, with the Ides occurring approximately at mid-month corresponding to a full moon (for March, day 15). The ides were then used to calculate other dates. For us this year the full moon comes on March 9, and the Ides of March cast not a foreboding spell but announce the end of winter and rebirth of spring with the coming of equinox on March 20 (at ~5pm).

And astronomers have little to fear with the arrival of equinox, for we can get outdoors again without freezing both day and night. And better – spring is galaxy season here in the northern hemisphere. More galaxies can be seen in moderately-sized telescopes in spring than any other season here, with the Messier objects in Leo and the dense galaxy clusters in Virgo leading the pack. If you’ve never seen galaxies through the eyepiece of a good telescope, or better from the live stream of a modern astro-video camera on that telescope, this spring will be your best opportunity. Recently we further upgraded the video astronomy capabilities at our Washington Crossing Observatory. The ZWO-294 color CMOS camera has been attached to the Celestron-14 telescope, and the co-mounted 5-inch refractor (previously with the SX Ultrastar camera attached) has been returned to rich-field duty with eyepieces. On the C14, a new 2-inch flip mirror is in place allowing the observer to flip back and forth between eyepiece and video camera (the camera is red color in the photo below). Keyholders can get refresher training on using the cameras, and newer members can learn the workings of the observatory, by contacting observatory@princetonastronomy.org.

The new configuration of the AAAP’s Celestron 14 telescope with flip mirror and camera and eyepiece attached.

Ad astra Freeman Dyson!
One of the most significant and appreciated figures in the world of physics and in Princeton’s enduring scientific community, Freeman Dyson has passed away (Feb 28). Freeman Dyson was an early and continual member of AAAP over the past four decades, and gave several memorable lectures to our club through the years. He will be missed by the world and the entire science community. His writings convey much of his wit and wisdom and will be read for decades to come. To the stars, Freeman Dyson!

A Visit to Mt Lemmon Sky Center near Tucson, Arizona: the 32in Schulman Telescope
The sunny attractions in the Sonoran desert in southern Arizona can be irresistible to travelers escaping the vicissitudes of the east coast winter. There amongst the giant Saguaro cacti and rough-hewn colorful mountains and valleys can be found surprising mineral and biological diversity, with countless places to explore. Tucson, a city which doesn’t need to try too hard to retain the old west feel, is fortunately restrained in its modern suburban growth by natural containment from the mountain boundaries around it. This makes Tucson a great destination for amateur astronomers, as the light pollution hasn’t yet completely ruined the skies of the two splendid, publicly accessible observatories at Kitt Peak and Mt Lemmon.

Mt Lemmon Sky Center, on top of the mountain on the north side of Tucson, may be less famous than Kitt Peak to the southwest of the city. But for amateur astronomers there is a special appeal of Mt Lemmon – it has the largest telescope dedicated to public astronomy outreach in the all of North America. The 32in Schulman Ritchey-Chretien f/7 reflector telescope is an impressive instrument that excels in both astrophotography and visual eyepiece observing alike. The views through the eyepiece were stunning.

The observatories on Mt Lemmon are owned and operated by the University of Arizona. Their mission is “to engage people of all ages in the process of scientific exploration by using the local “Sky Island” environment to merge a wide variety of science and engineering disciplines, thereby fostering a deeper understanding of our Earth within the Universe”. They do this very well, and at the next AAAP meeting I will share some of the learnings about how they do outreach. Amateur astronomers and the general public can sign up for the SkyNights Star Gazing program by registering on the Mt Lemmon Sky Center website, ($75 fee, group limited to 28 people).

The dome and 32 inch Schulman telescope at the Mt Lemmon Sky Center is available for celestial observing by the public – the largest outreach telescope in the U.S. 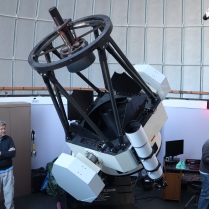 This entry was posted in March 2020, Sidereal Times and tagged director, parker. Bookmark the permalink.