See you in the New Year – the December 11 meeting is cancelled. Time seems more precious than ever as the year winds down, so you’re getting an evening back on your calendar! Thanks to you all for participating in this real-time astronomy experiment that is the AAAP. We’ll resume meetings again on January 8, 2019 with a novel presentation that Program Chair Ira Polans has lined up. You can read more on upcoming speakers in Ira’s section in this issue.

Recent lectures at AAAP – a tour de force of astronomy. Contemplating the splendor and wonder of the night sky from both aesthetic and scientific perspectives is a great way to wrap up a year of fine astronomy in AAAP. We’ve again had fascinating talks by knowledgeable guest speakers this fall. The recent presentations on the Harvard astrophotographic plates, stellar nucleosynthesis, spectroscopy, and human vision physiology can help us understand some of the complex processes driving star formation and the genesis of deep sky objects. For example, consider the reflection nebula NGC 7023 in Cepheus (image below).

Cepheus is a circumpolar northern constellation and always above the horizon at our latitude, so NGC 7023 is well-positioned now for imaging from New Jersey. The mysteriously beautiful and colorful nebula is a vast interstellar field of dust and gas surrounding a central star (near the middle in the image). This star, with the unartful name HIP-103763 (from the Hipparcos catalog), is larger than our sun (about 9 solar masses) and therefore hotter and more energetic. Stars of this size can fuse hydrogen to helium using the CNO cycle on the main sequence as we learned in October. This star’s spectral classification is type B2V, based on the Harvard sequence of stellar spectra originally developed from studies of the glass plates we learned about last month (and two years ago from Dava Sobel). If examined by spectroscopy the star shows strong Balmer lines of hydrogen emission, as discussed in September. The nebula does not emit light intrinsically, but glows by scattering and reflecting the intense stellar flux from HIP-103763. The color is intensely blue because the size of the dust grains in the cloud are similar to the wavelength of blue light, making the efficiency of scattering highest in the blue range of color perceived by the cone cells in the human retina, as presented in the 10 minute talk last month. NGC 7023 astrophoto by Rex Parker from home observatory in Titusville NJ, using 12.5” Cassegrain telescope and SBIG ST10 CCD camera.

Winter solstice – solar and clock time. Soon the sun will reach its most southerly apparent position as the temperatures drop and the days shorten. Solstice on December 21 brings the shortest day and longest night of the year, but the earliest sunset in New Jersey will be on December 8 (at 16:33 EST). This seeming disconnect has more to do with clocks than celestial mechanics, because our time system is based only approximately on solar days. Clocks run precisely on 24.0 hour days, while a solar day (period between solar transits) varies and is seldom 24.0 hours. The yearly relationship between apparent solar (sundial) time and clock time is shown in the graph below which shows the equation of time — above the axis the sundial is faster than the clock, and below the axis it is slower. 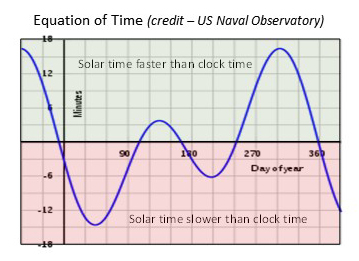 This entry was posted in December 2018, Sidereal Times and tagged director, parker. Bookmark the permalink.