Pioneers in understanding our Universe

Pioneers in understanding our Universe

Bell Labs was the research arm of the telephone company AT&T. In the telecommunication business, the scientists got to experiment with different radio antennas. And as an act of serendipity, came up with two of the most significant discoveries in astronomy and cosmology in the twentieth century. I was curious about finding the relics of these two accidental discoveries and went on a trip, about an hour’s drive from my home to find these historic antennas.

Going in chronological order, first pioneer is Karl Jansky who during the 1930s while testing his radio antenna, discovered radio waves coming from space. Till then, radio waves only came from terrestrial radio or TV stations. Or other radio transmitters on the ground. Getting waves from outside was really an abnormality. Jansky found that the radio waves were coming from the center of the Milky Way, from the direction of the Sagittarius constellation. Jansky published his work but no one paid much attention to it. Jansky died young in his 40s. After the second world war, scientists in US, Europe and Australia started building radio antennas and receivers to receive signals from outer space.

The field of radio astronomy grew since the 1950s and Jansky was recognized after his death. A unit called Jansky (amount of radio signal in watts received per square meter per Hertz) has been named in his honor. Today, radio astronomy is as important as optical astronomy using telescopes. By tapping signals from radio, microwave, infrared, visible light, ultraviolet, gamma rays, x-rays, leading to multi-messenger astronomy, lot of our Universe has been discovered and confirmed. After all, objects in our Universe do not transmit signals which are more convenient for some humans in a distant part of a distant galaxy to see with their eyes or their telescopes. Our telescopes needed redefinition, and that happened courtesy Jansky.

I found by searching the internet where the Jansky antenna is. The original antenna unfortunately is not there any more. A replica has been built and installed in Green Bank in West Virginia, where major radio telescopes are stationed. I hope to visit Green Bank someday. However, a monument is there in 101, Crawfords Corner Road in Holmdel, New Jersey. I tracked down the place. The address points to a building which is a modern day research lab. There are two concentric roads around the building. It is not easy to find the monument. I kept driving on the concentric roads a few times and then located the monument in between the two circular roads. It looks more like a bicycle stand, but I do respect monument as a shrine to Radio astronomy. Given below are three pictures taken using my iPad pro. 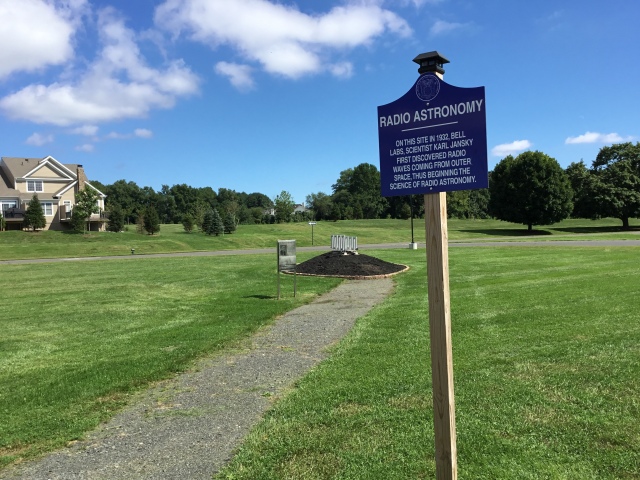 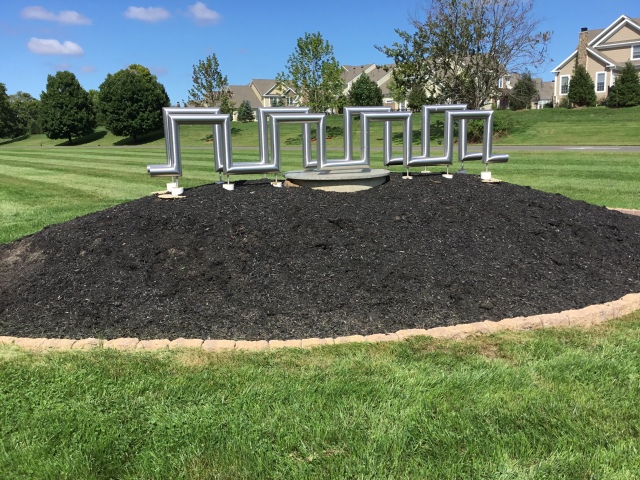 Next discovery came in the 1960s. Two scientists Arno Penzias and Bob Wilson were testing a horn antenna, which is used in transmission and reception of signals involving microwaves. They found some noise coming into the receiver. They thought it is related to some ground based sources, or due to some dust and bird droppings. All the cleaning was done, the antenna rotated in all directions. Yet the same noise persisted. This is the same noise we see on our TV set when a station is not transmitting any signal on a given channel. Those black and white dots with a hissing noise is what Penzias and Wilson received. Word spread about this discovery.

At the same time in nearby Princeton University, some scientists have speculated the existence of Cosmic Microwave Background radiation (CMB) in support of the big bang theory which explains the formation of our Universe about thirteen billion years ago. Penzias and Wilson met the Princeton team and the discovery was confirmed. This background noise is the leftover from the creation of the Universe. The oldest relic from the birth of our Universe. Since then, three satellites have been launched to study and confirm the theory. Penzias and Wilson were honored with the Nobel prize in Physics in 1978. The discovery of CMB certainly led to a revolution in cosmology, in our understanding of our Universe.

Fortunately, the original antenna is still there and enshrined at 791 Holmdel Road in Holmdel, New Jersey. I visited the historic site and given below is the picture taken with my iPad pro. 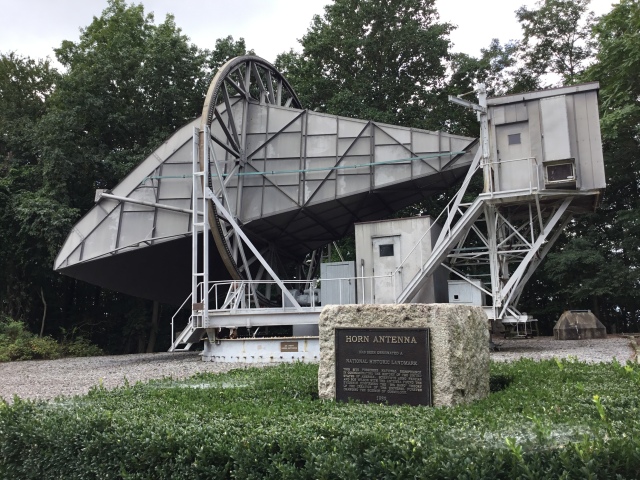 These monuments are certainly milestones in the human quest to picturize our Universe. And I am glad that they exist to inspire the posterity.

This entry was posted in October 2018, Sidereal Times and tagged ganti. Bookmark the permalink.