Telescope That ‘Ate Astronomy’ Is on Track to Surpass Hubble
Like the petals of a 20-foot sunflower seeking the light, the 18 hexagonal mirrors that make up the heart of NASA’s James Webb Space Telescope were faced toward a glassed-in balcony overlooking a cavernous clean room at the Goddard Space Flight Center here….more

Pluto ‘has slushy ocean’ below surface
Pluto may harbor a slushy water ocean beneath its most prominent surface feature, known as the “heart”. This could explain why part of the heart-shaped region – called Sputnik Planitia – is locked in alignment with Pluto’s largest moon Charon…more

‘Roundest known space object’ identified
Astronomers claim to have discovered the roundest object ever measured in nature. Kepler 11145123 is a distant, slowly rotating star that’s more than twice the size of the Sun…more

Europe launches Galileo satellite quartet
Europe has extended its satellite-navigation system by putting another four spacecraft in orbit. They went up on an Ariane 5 rocket from French Guiana, leaving the ground at 10:06 (13:06 GMT)…more

NASA and FEMA Rehearse for the Unthinkable
Imagine if scientists discovered that an asteroid was hurtling toward Los Angeles. The possibility has existed on the pages of Hollywood scripts. But in what may be a case of life imitating art, NASA, the Federal Emergency Management Agency and other government agencies engaged last month in a planetary protection exercise to consider the potentially devastating consequences of a 330-foot asteroid hitting the Earth…more 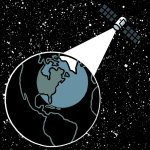 Earth, the Final Frontier
Rochester — On April 1, 1960, the newly established National Aeronautics and Space Administration heaved a 270-pound box of electronics into Earth orbit.
Tiros-1 was the first world’s first weather satellite. After its launch, Americans would never again be caught without warning as storms approached…more

This entry was posted in December 2016, Sidereal Times and tagged kaplan, snippets. Bookmark the permalink.