November 8 Meeting. This is a pretty important date, and to help you get through it we’ve arranged for a high-impact speaker for the AAAP guest lecture at Peyton Hall Nov 8 (7:30pm). Please see Ira’s article in this edition of S.T. for more information about the speaker and topic. In view of developments expected to emerge later that evening, we’ll curtail the post-speaker part of the meeting and get everyone out by 9:00 pm.

Another Jersey StarQuest Come and Gone. Sixteen telescopes on the observing field of the Hope Conference Center in north Jersey were the instruments of choice for an intrepid 21 astronomers attending StarQuest on Friday Oct 28. They were not to be disappointed, as the skies cleared up and the wind dropped, giving excellent observing conditions for much of the night. Although appropriate evening attire included hats and gloves and down vests, skies remained clear until haze began to show up in the atmosphere at midnight, and by 1 AM most of us had covered our scopes and headed for the bunkhouses. Yet for 5-6 hours some excellent observations were made through the wide variety of telescopes. Many fun conversations were shared over coffee and snacks while warming up in the lodge, and all agreed this was another successful event in the 20+ year history of Jersey StarQuest held by AAAP.

The StarQuest observing field as twilight begins to fade Oct 28.

Jenny Jump Observatory. On Saturday morning Oct 29, a group of StarQuest attendees followed Bill Murray over to the nearby Jenny Jump State Forest to check out the United Astronomy Clubs of NJ site. AAAP is a founding member of the UACNJ, and we own an observatory there built by club members in the mid-1990s (including a few current members). In addition, several other NJ clubs have observatories there. The UACNJ runs an active Saturday night public observing program. The AAAP roll-off roof building in the photo below houses a 12.5-inch Newtonian reflector telescope, although work is needed to bring it back to top form. A plan is being developed to revise and renovate our operation at Jenny Jump and upgrade the mount and telescope. It is hoped that AAAP members may find these facilities and quality of the dark skies appealing for future adventures in astronomy. Please contact me, Bill Murray, or other Board members if you’d like to learn more about this resource.

The AAAP observatory stands next to a precipice on Jenny Jump Mountain. 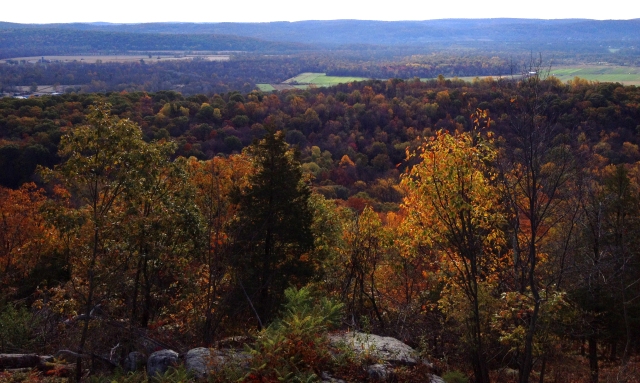 Speaking of Dark Skies. One of the cool deep sky objects we observed visually at StarQuest through a couple of telescopes is the great spiral galaxy NGC-7331 in the constellation Pegasus. This object was first noted by William Herschel in the 1780’s, and now we know it to be similar in size and structure to our own galaxy, but about 40 million light years distant. Recently I photographed NGC-7331 — I’d like to show you what a galaxy of magnitude 10.5 looks like via CCD camera and telescope (see below) compared to its appearance visually. When you next get a chance to do some observing, see if you can pick up this amazing object, either in your telescope or at AAAP’s Washington Crossing Observatory.

The spiral galaxy NGC-7331 in Pegasus, with other galaxies in the background. CCD image taken in central NJ. (photo by R.A.Parker)

This entry was posted in November 2016, Sidereal Times and tagged director, parker. Bookmark the permalink.