After a long journey of 300 days in the vacuum of space, Mangalyaan, India’s Mars Orbiter Mission was finally captured by the gravity of Mars. A nation heaved a sigh of relief, yours truly included. Congratulations followed from all over the world. NASA, ESA, even rival China celebrated in India’s joyous moment. I want to highlight some of the challenges involved and cover some basics of space travel.

Why is it a big deal sending a spacecraft towards Mars? The low-budget spacecraft was a big deal for a developing nation. It demonstrated the mastery the technology required to maneuver one’s way in the wilderness of space. Prime Minister Modi stated that it cost India less than making of the acclaimed science fiction movie Gravity.

What are the challenges in these kinds of mission? Firstly, getting the trajectory right. The distance between New York and Mumbai is fixed at about 9000 miles. It does not change with time of the day or at night or in a different season. A plane takes slightly less or more time depending on whether the winds are favoring or against. But the distance never varies. Mars is a planet orbiting the Sun, very much like Earth does, except that it is farther from the Sun. The position of both planets on their orbits coincide very rarely. One needs to correctly determine when is the right time to launch the spacecraft so that it can reach Mars. Because both Mars and Earth are moving platforms, it is like a shooter standing on a moving platform trying to shoot at a target, which is on another moving platform. Timing is everything. Trajectory is important for spacecraft as much as it is important in spin bowling in cricket.

Once the spacecraft is flung into space with a massive thrust,  it leaves the Earth’s orbit and goes into an orbit around the Sun. Its orbital radius increases constantly until it approaches that of Mars. It then chases Mars and it slows down enough to be caught in the gravity of Mars. It travels relatively faster, and it needs to apply brakes. Too much deceleration and it would crash into the atmosphere of Mars and get destroyed. Too little deceleration and it will shoot past Mars with no chance of making another attempt. Why? Because an additional change in speed or direction will require burning of fuel. Fuel is a scarce commodity because it has to be lifted off the Earth. It is very expensive to lift one pound of any material into space. That exercise itself needs lots of thrust and fuel.

Once slung into the orbit around the Sun, the engines are mostly shut down because a body just keeps orbiting around the Sun unless something disturbs it. Periodically some fuel is burnt to raise the orbit towards Mars. When it reaches Mars, the engines need to be restarted after going through all the ravages of space, which by itself a major challenge. It is achieved by sending signals from the command center on the Earth. Once engines start, lot of fuel must be burnt (about half an hour worth of it) to slow the spacecraft down to be captured by Mars. This is a very precision exercise. This is where other countries lost their spacecraft on their maiden voyages, and India got it right on its first attempt.

How did India do it ? By studying the failures of other countries. Like Isaac Newton once said, “If I have seen further it is by standing on the shoulders of giants.”  Steve Jobs once said that  Amazon came up with the idea of a tablet with its Kindle, but Apple carried the idea a little further with the iPad. India carried the earlier ideas a little further. If no other nation sent a spacecraft to Mars, Mangalyaan might not have succeeded. Additionally, they kept the design and the payloads very simple and light. They did not carry the same scientific instruments which others carried. By the same token, their instruments are not trivial and complement what other spacecraft and rovers are doing on Mars. Let us wait for the science to begin. Mangalyaan is supposed to study the methane and analyze the atmosphere to look for signs of life. Life could have been there in the past, if not now.

Will it help India while millions are starving? Certainly. Technological capability results in businesses, both on Earth and in space. Our mission was cheap, but the technology was not cheap. Cheaper educated manpower using local low-cost components and some ingenuity made the mission cheaper. India is already launching satellites into space for other countries because India is a low-cost carrier like a discount airline,  Businesses build economies and benefits to the masses, not subsidies or distribution of wealth.

I don’t think we should view it as a space race. Supremacy over China and Japan? Every dog has its day. Someday they will zoom past India. Whatever the scientific findings are, it eventually benefits humanity. It adds to mankind’s pool of knowledge.

My kudos to all the space scientists and the engineers involved in this mission. I found a great picture in the news reports, which I reproduced below. It gives the orbital trajectory which the spacecraft took, the positions of Mars and Earth at launch time and when it at reaches Mars, the instruments carried, and the rocket that launched Mangalyaan. 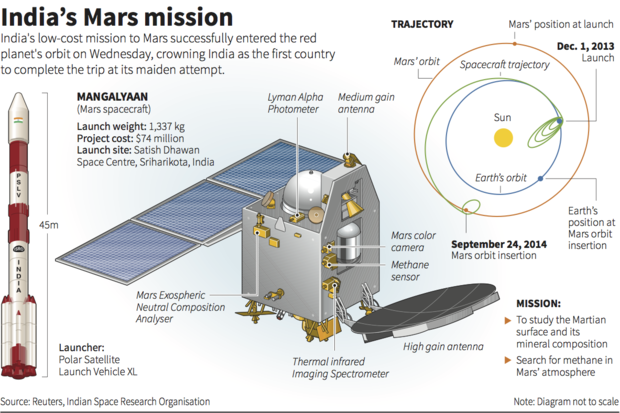