India’s Mars mission
India has successfully put a satellite into orbit around Mars on its first attempt. The Mangalyaan robotic probe arrived at the planet early on Wednesday following a 10-month journey from Earth. A 24-minute engine burn slowed the probe down enough to allow it to be captured by Mars’ gravity. 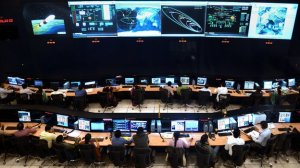 The complete article may be found at: India’s Mars mission

The Moon’s mass alters the structure of spacetime at it’s location, and this distortion propagates outward, becoming more dilute with the volume encompassed according to the inverse cube of the distance. At Earth, the distortion results in the waters of the oceans following slightly different paths through spacetime than does the rigid planet beneath, producing the characteristic egglike shape of the tidal effect. The tidal heartbeat is that of the very fabric of spacetime. The tides at our feet carry a profound message.

Excerpt from Tides and the Earth-Moon System by Roy Bishop, RASC Observers Handbook 2014.

This entry was posted in October 2014, Sidereal Times and tagged india, Mars, tides. Bookmark the permalink.