A Pilgrimage to Palomar Observatory

On a recent business trip to San Diego, I had the good fortune to have a free day before my red-eye flight home so I rented a car and headed up into the mountains to visit the Palomar Observatory. The observatory is located in Palomar Mountain State Park at an elevation of 5,617 feet. The scenery on 1½-hour drive was worth the trip alone, particularly the last 45 minutes up the mountain to the park entrance.

The observatory is an active research facility run by Caltech and the home of four telescopes: the famous 200-inch Hale Telescope, a 60-inch reflector, 48-inch Schmidt camera and a 24-inch robotic telescope. Visitors are limited to daylight hours so as not to disturb the astronomers working at the facility. The Greenway Visitor Center houses a small museum and gift shop, which is about 300 yards from the main dome. An 18-inch Schmidt telescope that was used to provide targets for the 200-inch and for systematic surveys of minor solar system bodies is on display along with exhibits about the observatory and the cosmos. 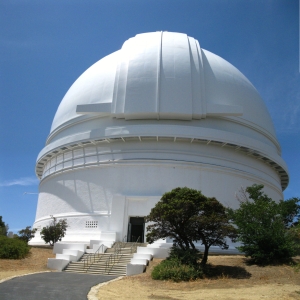 I recommend taking the guided tour because you get better access to the dome than the self-guided tour. Very knowledgeable docents from a local astronomy club begin the tour by taking visitors into the lower level of the dome where the optics workshop and storage areas are located. Then the tour proceeds to the main floor where the instrument cluster at the base of the OTA can be seen. Here they explain the history and operation of the scope using a scale model before proceeding to the upper level for a better view of the OTA and mount. Photography inside the dome is difficult because of the low light levels and the huge size of the scope.  More exhibits and models are on display in the visitor’s gallery including a view of the massive wheels that the dome rotates on.  More information including a podcast about visiting the observatory is available on the Palomar website: http://www.astro.caltech.edu/palomar/visitor/. The visitor center is handicapped accessible, but visiting the dome requires climbing 70 steps. 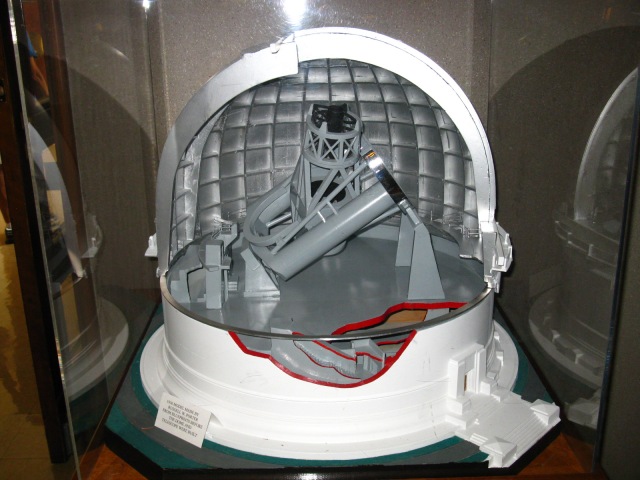 Astronomer and Caltech founder George Ellery Hale oversaw planning and construction of the 200-inch scope that bears his name. When it was completed shortly after Hale’s demise in 1948, it was the largest telescope in the world and the third record holder constructed under Hale’s supervision. Construction of the dome took place between 1936 and 1939. The construction of the telescope began in 1937 and was completed long before the 200-inch mirror was ready. The scope components were fabricated primarily at the Westinghouse South Philadelphia plant, then shipped by boat through the Panama Canal to San Diego and trucked to Palomar Mountain for assembly inside the dome. 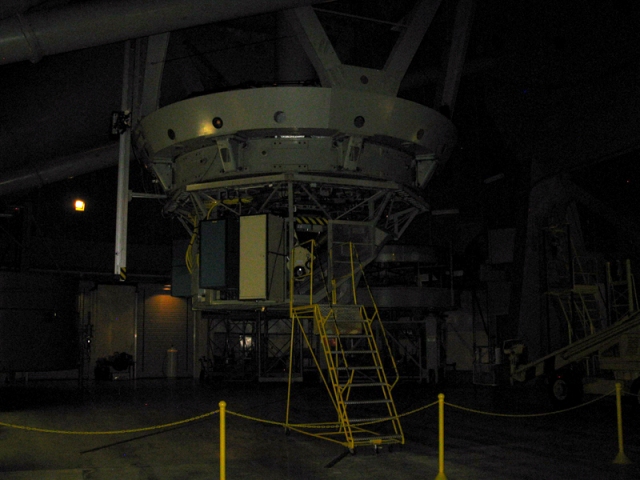 The original plan was to fabricate a 200-inch disk out of quartz, but the idea had to be abandoned. Instead Corning Glass Works were hired to cast the 200-inch mirror out of Pyrex. After a failed attempt to cast the mirror, a second disk was successfully cast in 1934. The disk remained in the oven at pouring temperature for just over a month and then was gradually cooled over a period of ten months. In 1936, the blank was shipped by rail under armed guard from New York because religious groups threatened to destroy it because they considered it blasphemous to try to look into God’s domain. All across the country thousands of people lined the train tracks to watch it pass.

For 11½ years including delays due to World War II, the mirror disk was in Caltech’s optical shop for grinding and configuring into the proper shape. It was finally trucked up the mountain to Palomar in 1947. Following two years of performance testing, additional polishing, adjustments and aluminizing, the first “official” photos were taken by Edwin Hubble on January 26, 1949.

The 200-inch Hale Telescope has been associated with several cosmological discoveries and technical innovations. Early on Walter Baade made observations of Cepheid variables in the Andromeda Galaxy that led him to double Hubble’s estimate of the distance to Andromeda. Allan Sandage refined the estimate of the Hubble constant and the age of the Universe at Palomar. Baade, Jesse Greenstein, and Rudolph Minkowski worked on identifying stellar populations of different age and elemental composition that led to new understandings of galaxy formation and stellar evolution. Based on spectra photographed with the Hale scope, Maarten Schmidt determined that radio source 3C 273 lay far beyond the Milky Way and coined the term quasar (quasi-stellar object) to describe these highly luminous objects.

The Hale Telescope is connected to Princeton through the work of Prof. James Gunn. While at Caltech in the early 80s, Gunn, James Westphal and collaborators pioneered the use of CCDs to boost the sensitivity of the Hale scope. An early instrument with four 800×800-pixel CCDs was the prototype for Hubble Space Telescope’s Wide Field and Planetary Camera.

One of the current objectives of the observatory is to produce images of comparable precision to those of space telescopes for mapping the surface of Solar System bodies and directly imaging close multiple stellar systems, young planetary disks and extrasolar planets. Caltech scientists and engineers with collaborators from other institutions have developed adaptive optics for the Hale Telescope that are applicable to other ground-based research telescopes.

This entry was posted in September 2014 and tagged caltech, gunn, hale, palomar, wright. Bookmark the permalink.