Video Astronomy for AAAP Members
Many of us have had the experience of showing the planets, sun, and deep sky to the public using telescopes. Children and adults alike can be inspired by a telescope, but just as often nowadays can be put off by bland washed out “flashlight in the fog” views, as sky conditions succumb to the scourge of skyglow and light pollution. When I first started in AAAP in the mid-90’s with a Celestron-8 and the club’s 12.5” Newtonian, I found nearly all of the Messier Objects using glass eyepieces and “star-hopping” methods, pushing the scope around the sky by hand. As light pollution and skyglow worsened in our area over the years the Messiers faded badly in the eyepiece.

The difficulty in seeing objects today in an eyepiece makes visually sharing the night sky risky at times. It can have the unintended consequence of disappointing people, especially those new to telescopes. The last thing we want to do is dissuade kids from pursuing astronomy and making a connection with nature and the sciences. Ironically the availability of Hubble images on the internet feeds into this tendency towards disillusionment with actual views of the deep sky in central NJ. For amateur astronomers, technology is the best way forward. It’s the only way to overcome lost sky contrast in locations like ours. Importantly, the new technologies mean that you don’t need to initially know or learn as much about astronomy to do meaningful observing as was needed even 10 years ago. Automated portable mounts with precise “go-to” capabilities, and planetarium program databases on laptops and mobile devices enable deep sky objects to be found and tracked accurately despite the inability to see them through an eyepiece. The newer generation of CCD- and CMOS-based astronomy cameras with high download rates and great sensitivity enables objects that are literally invisible in the eyepiece to emerge brightly in near-real time on laptop or monitor.

So we continue to upgrade our astronomical equipment at the AAAP Observatory. It’s my hope that the improvements will enable more members to develop observing skills. The equipment is there for members to use. The learning curve for the new equipment is not steep, thanks to much improved new software that less experienced amateurs will appreciate. The club is here to help members get the most out astronomy. Stay tuned for more specific plans which we’ll discuss at the Jan and Feb meetings at Peyton Hall, and keep an eye on Sidereal Times, the website Calendar, and e-mail messages this winter.

Solstice and the Length of a Night
I’m excited to help kick off the New Year in astronomy as AAAP convenes again at Peyton Hall January 14. During the presentation our focus will return to the sun, appropriately enough since we recently celebrated the winter solstice. On Dec 21 the sun reached its lowest noon altitude and we formally began winter season in the northern hemisphere (but where is the snow, you ask?). Solstice gave us the shortest day and longest night of the year with sunset locally at 4:36 pm and sunrise at 7:19 am on Dec 21 here in central NJ. But surprisingly this day did not provide the earliest sunset nor the latest sunrise times. This seeming paradox needs explaining.

The standard time system is based only approximately on solar days and more exactly on clocks. Clocks are based on 24.00 hour days, while a solar day (the period between solar transits) varies and is seldom 24.00 hours. The exact relationship between solar and clock time can be calculated with ephemerides software. Of several good programs out there, the one I use is the software developed by the US Naval Observatory’s Astronomical Applications Dept. The “Multi-year Interactive Computer Almanac” (MICA, v 2.2.2) program is available at modest cost from Willman-Bell, https://www.willbell.com/almanacs/almanac_mica.htm. MICA can calculate positions and timings of all the relevant planetary and solar events. Using MICA I determined the times of sunrise, sunset, and the length of night for central NJ for each date over one year. The data plotted in Excel (Figure below) show that the latest sunrises (the few days around Jan 4) come later, and the earliest sunsets (the few days around Dec 7) come earlier, compared to the longest night of the winter on solstice Dec 21. The discrepancy between solar time and clock time is often referred to as the equation of time, which can also be represented as the analemma with which astronomers and navigators may be familiar. Here “equation” really means “reconcile a difference” rather than a mathematical equation such as we’re familiar with.

Visitor from another Star
At the December meeting I showed an image and video (below) of the interstellar comet, 2I/Borisov, the first ever discovered. The comet is very faint and small, but the finding is quite exciting considering it means that material from another star has entered our solar system directly and came within ~180 million miles (2AU) of earth. No reports of telescopic visual sighting of this comet have emerged, but amateur observations have been made with relatively large telescopes using CCD cameras. To make the video below, I used a Skynet telescope, PROMPT8. This is a 0.6 meter diameter, 4.1 meter focal length meter telescope with CCD camera located at CTIO Observatory in Chile. The video is made from 17 consecutive 2 minute subframes, so it shows movement of the comet over 34 min. In that time the comet moved about 1.4 arcmin compared to the stars in the field. The still image shows the same set of images stacked and centered on the comet so that the stars trail as a series of points.

Comet Borisov at 3:30am on Dec 10 2019, taken over a 34 minute period. Image and video by RAParker using the PROMPT8 telescope with UNC’s Skynet. 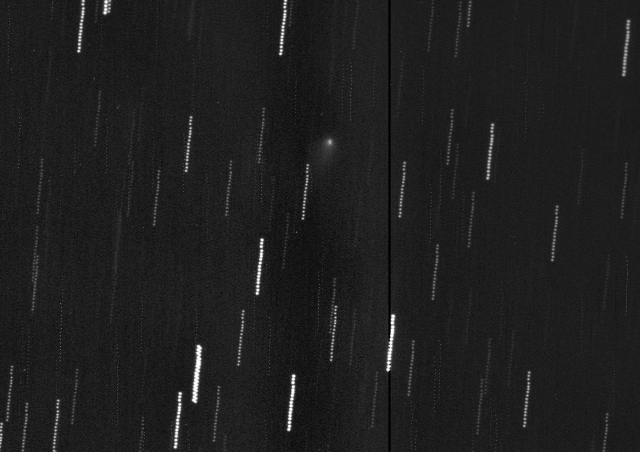 Seeking co-editor for Sidereal Times
We have an opportunity for a new co-editor of Sidereal Times, the official monthly publication of AAAP. The co-editor role is to organize and edit member submissions and do layout using WordPress software for uploading to the website. Experience with WordPress is helpful but not necessary. We’re looking for a member who has an affinity for writing, with creativity and a willingness to contribute to others’ knowledge while gaining internet editing experience. If interested please respond to editors@princetonastronomy.org or director@princetonastrony.org.

This entry was posted in January 2020, Sidereal Times and tagged director, parker. Bookmark the permalink.