A complementary portal to an impressionists viewpoint

As most know, I am not an astrophotographer.

However false coloring does provide some interesting views into deep space by the Hubble Space Telescope.

And I had some time to fiddle with Photoshop.

I created an account at the Space Telescope Science Institute (stsci.edu), and went to the Mikulski Archive for Space Telescopes (MAST). There, they hold a variety of astronomical archives, for the public to access.

From MAST, I found the HST Data Search (http://archive.stsci.edu/hst/search.php) and loaded up on M51.

They were closely related, enough, to provide some color contrast, when placed into Red-Green-Blue channels, in Photoshop.

GIMP, a free program could be used. However, I am in a new cycle of relearning Adobe Creative Suite – so this fit the bill – as it was already paid for.

What is really very cool, though, is the database not only gives RA, DEC, Exposure Time, Aperture and Instruments used, they also give a complete citation as to where to find where the images were used in scientific literature.

Just as it is found, here:

I took the last three images in a series, that might be passable for use in three separate color channels.

The composite images appear below, “side-by-side”. The bottom one of course, was way manipulated in Photoshop. 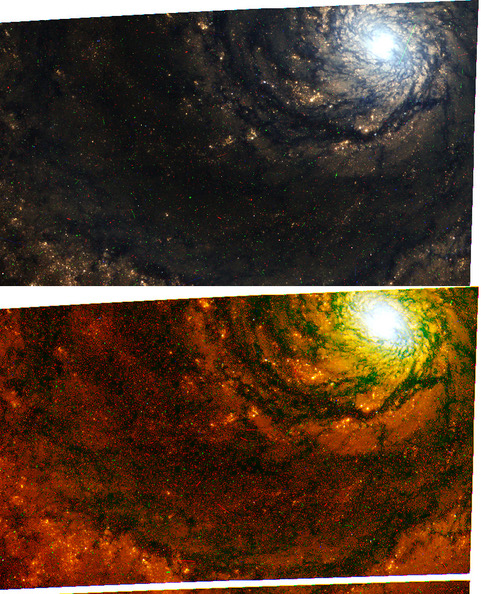 However, as a technique for an outreach class, this may have merit.

Sidereal Times readers: you decide if this is something we can do, for kids, or adults interested in Hubble, at some point going forward.

Who knows? By false coloring existing Hubble archives, your Outreach might even discover a “black hole”!

P.S. – if you have a Mac, running High Sierra, the archive server required encrypted ftp protocols, which is not supported by Mac OS.

I am working with Apple to…ahem…get them to re-adopt encryption for ftp.

In the meanwhile, I found an inexpensive (free) alternative from the Apple Store, called “Forklift”. Works like a charm, right out of the box.

By the by – running an ftp session, out of DOS, in Windows 10, works just fine, too.

This entry was posted in May 2018, Sidereal Times and tagged fiddle, frimet. Bookmark the permalink.