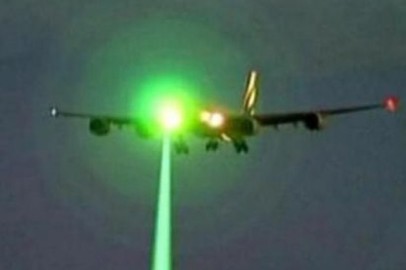 Wilbur Dixon describes himself as a space enthusiast and a lifelong amateur astronomer who happens to own a green laser. Dixon of Princeton, NJ insists he’s not a “laser nut – just an astronomy nerd” who is tired of intrusions upon his personal freedoms. So, when he read about a ban on green lasers passed by the NJ State Legislature last month, the he lit up.

“I can’t believe they’re trying to do this in New Jersey,” Dixon said. “The worst light pollution in the country is taking away my God-given right to enjoy the night sky, but now I can’t even point out the few remaining objects we can see in NJ.”

Bill 760 has outraged green laser owners across the state because it would ban the sale and use of green lasers except by law-enforcement.

“It sounds like one of the more extreme pieces of gun control legislation,” said Dewey Cheatham, a professor at the Rutgers Law School.

The bill, if signed by Governor Christie, would require laser owners to pay a registration fee of $10 per laser per year, undergo a state police criminal background check and submit detailed personal information for a registry that would include fingerprints, Social Security numbers, birth dates and passport-sized photographs.

Applicants who are denied registration would be required to surrender their green lasers to the state police. Anyone who violates the law could face a fined or jail time.

Because no permit is needed to own a green laser, it is difficult to say how many New Jerseyans own one.

The District of Columbia and several states, including California, Hawaii, New York and Michigan, require some form of registration for green lasers, according to information compiled by the American Astronomical Union’s Committee for Legislative Action. A few states have imposed guidelines for laser owners in specific areas.

Critics of New Jersey’s proposal are vocal in their opposition. “People from Newark and Trenton support it, but people from the dark-sky areas like the Pine Barrens say I’m a Nazi,” said state Rep. Eileen Wright, who represents Essex County.

­­­Wright said she proposed the measure as a means to apprehend criminals responsible for flashing planes at Newark Liberty Airport.

“I’m not in favor of taking away people’s right to bear lasers,” she insisted. “They would just have to register them — like they register a vehicle every year. I want to make it safe for all people across the state.”

The United Astronomy Clubs of New Jersey immediately took a firm stance against the bill and urged its 35 members to contact lawmakers and oppose it. The organization contends that a green laser registry is a step down the slippery slope towards banning light buckets in NJ.

“The UACNJ is fundamentally opposed to any sort of green laser registry for law-abiding citizens,” spokeswoman Cassy O. Peia­­­­­ said, adding that lawmakers should focus on “dealing with the criminal element” rather than placing the burden on law-abiding laser owners.

In only a month, the issue has become so polarizing that one of the bill’s original sponsors, Mick Stupp, a Mercer County Republican, has withdrawn his support. “I have some concerns because this is more punitive than it needs to be,” Stupp said. “There are many law abiding astronomers who use green lasers at star parties to educate the public.”

Sparky Wyer, Professor of Electrical Engineering at NJIT advocates a technological solution to identify laser abusers. He says that lasers can be easily modified to produce a very fast, pulsed code similar to morse code, that would identify an abuser’s personal information. The code would be undetectable to the eye, but a sensor he developed would detect and read the code.  The detectors would be installed on all commercial and military aircraft. If the aircraft is flashed with a laser, the abuser’s personal information would be transmitted to local law enforcement authorities for apprehension. Wyer says “Astronomers are pretty handy so I have posted instructions to modify their lasers on my website: http://www.aprilfool.com.”

This entry was posted in April 2016 and tagged april 1, laser, wright. Bookmark the permalink.