Since some members had reported seeing a decline in the optical performance of the 6-1/4 inch Hastings-Byrne refractor, I conducted a thorough test of it on the night of April 18. Dave and Jen Skitt and Gene Ramsey were also present. Although the night was slightly hazy, the seeing became very good later on.

Earlier, I had removed the objective and cell and brought it home for a thorough inspection to see if there had been any physical deterioration in the glass elements. I could find none. The two elements had retained the transparency that I had seen when I first examined them in detail in the early 1970’s after I had cleaned them. Here are current photos of the front and rear surfaces: 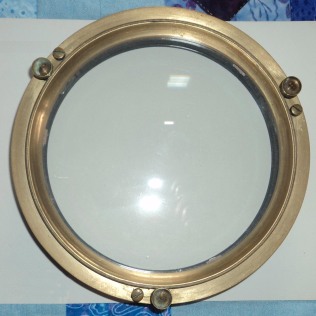 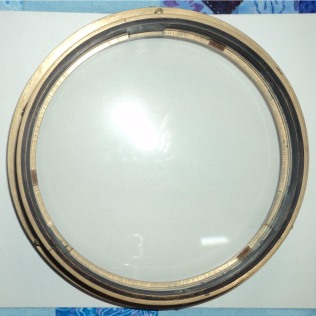 The best way to test the optical performance of any objective is to carefully examine the image of a moderately bright star at medium magnification and then run it in and out of focus to check the roundness of the diffraction images. I did this with the 13-mm Ethos eyepiece, which is one of the best eyepieces we have. It gives a magnifying power of 178 with the 2313 mm focal length of the Hastings lens. The star exhibited a perfectly round image in-focus, with the usual faint circular diffraction rings around it.

Going in and out of focus made the rings expand and contract in a circular pattern. This shows that the objective had remained squared-on during the years since I had last adjusted it at the telescope and has suffered no change in its performance on stars. No further adjustments should be required.

This test also confirmed that the tailpiece and focusing tube were squared-on themselves, as any looseness or maladjustment would have affected the diffraction patterns. Dave had previously noticed some looseness in the screws that attach the tailpiece onto the tube and had already tightened these.

As a confirming test, I put the scope on Jupiter with the aid of my laptop and Sky 6 working the newly-installed Paramount ME. The image was really nice and had no noticeable false color. The belts were very distinct and many small details were seen. The C14 was put on it also, and we all watched Io slowly approach the disc, becoming tangent to it at the predicted time, and then gradually entering the disc. Using both scopes, we could all see the satellite as a well-defined circular white dot against the duller surface of Jupiter, well after it had fully entered the disc. If anything, I thought the Hastings did somewhat better on this than the C14.

We also looked at several close double stars, including Castor and Gamma Leonis. Again, the Hastings lens performed up to its previous high standard.

Here is one possible reason why observers could have noticed a dropoff in the apparent performance of the lens. This might have been due to using the large and very heavy Meade “hand-grenade” 40-mm eyepiece. The heavy weight could deflect the focuser, especially before their attachment screws had been tightened. For a low-power eyepiece, it would be far better to use the replacement 55-mm Plossl recently bought by Bill Murray at NEAF. This much lighter eyepiece gives essentially the same true field of view as the 40-mm Meade. The older 55-mm Plossl may have been dropped at some time, causing an obvious color ring between the interior elements, and so it should not be trusted any longer. Using this eyepiece might also have caused some problems.

Separately, Sky 6 and the Paramount ME are working very well with the refractor. Objects in far different parts of the sky are always found within the field of a low-power eyepiece. Just center them with the joystick and they will remain centered for a long time as the mount tracks. You can switch eyepieces at will and objects will remain centered.

The refractor has now been elevated a full nine inches by changing to the Paramount. This is making the observation of objects high in the sky much more convenient than it used to be. Gene Ramsey has recently donated a step stool with a custom hand-made adjustable seat finished in polished Luan plywood (thank you, Gene!). High objects can now be very comfortably viewed with the aid of this handy accessory.

This entry was posted in May 2015, Sidereal Times and tagged church, Hastings-Byrne. Bookmark the permalink.