NASA WALLOPS FLIGHT FACILITY, VA – A commercial Antares rocket carrying the private Cygnus cargo freighter thundered aloft from a beachside launch pad in Virginia on July 13, bound for the space station and packed with a wide range of science experiments and essential supplies for the six person crew.

The flawless blastoff of the Orbital Sciences Corp. Antares rocket on the Orb-2 mission occurred precisely as planned at 12:52 p.m. (EDT) from Pad OA at the Mid-Atlantic Regional Spaceport on NASA’s Wallops Flight Facility on the eastern shore of Virginia – about a five-hour drive south from Princeton.

After a 10 minute ascent, Antares placed the Cygnus resupply spacecraft into an initial orbit of 120 x 180 miles (190 x 290 kilometers) above the Earth, inclined at 51.6 degrees to the equator.

After nearly a three day journey, Cygnus was delicately flown on an approach vector using GPS and LIDAR lasers to within about 32 feet (10 meters) of the massive orbiting complex.  Then it was captured in open space by Commander Steve Swanson as he maneuvered the 57-foot (17-meter) Canadarm2 from a robotics workstation inside the station’s seven windowed domed Cupola, 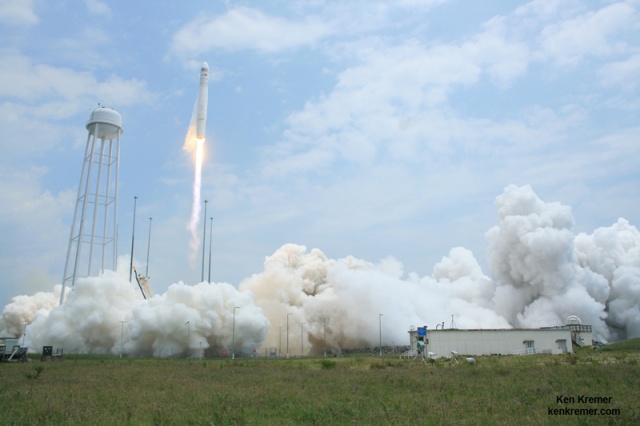