The Dark Side Of The Universe 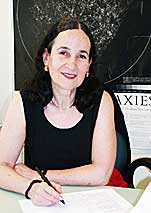 What is the Universe made of? Observations suggest surprising results: not only most of the matter in the Universe is dark and unconventional but, more surprisingly, the major component of the Universe may be in the form of ‘dark energy’ — a form of energy that opposes the pull of gravity and causes the expansion of the universe to accelerate. By combining observations of large-scale structure, distant supernovae, and the cosmic microwave background, we find evidence for a Universe that has only 5% ‘normal’ baryonic matter, 20% non-baryonic dark matter, and 75% ‘dark energy’. The observations suggest a Universe that is lightweight, with only 25% of the critical mass-density needed to halt the Universal expansion, and a geometry that is flat with no space curvature.

Neta A. Bahcall, the Eugene Higgins Professor of Astrophysics and the Director of the Undergraduate Program in Astrophysics at Princeton University will discuss her observations on the Dark Side of the Universe and their implications on Tuesday May 13th 2014. Bahcall is a member of the National Academy of Sciences, Distinguished Research Chair at the Perimeter Institute for Theoretical Physics, past Vice-President and Councilor of the American Astronomical Society, Century Lecturer of the AAS, and Chair and member of various NASA, NSF, and Congressional committees.

See you on Tuesday, May 13th at 8:00 p.m. in Peyton Hall, 4 Ivy Lane, Princeton. The lecture will be followed by a business meeting.

This entry was posted in May 2014, Sidereal Times and tagged 163 Erigone, IOTA, occultation, Regulus, Ted Blank. Bookmark the permalink.