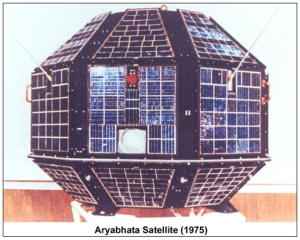 India launched a mission to Mars a few months back. The orbiter called “Mangalyaan” (Mars craft) is enroute to Mars now. A few years back, India sent an orbiter to the moon called “Chandrayaan” (Moon craft). The moon mission yielded a very high quality digital elevation map of the moon, and a global mapping of elemental abundance and mineral concentrations from spectroscopic studies. It even attracted international payloads from US and Europe in this remote sensing mission.

The Indian space program has come a long way in the last 50 years or so since its humble beginnings. Much of it did not make headlines as the cold war era space race was on. Back then, space was the prerogative of only the superpowers and the advanced nations. It all started after India got independence from Britain in 1947.

Dr. Vikram Sarabhai was the father of Indian space program. He was a very inspirational leader. The aim of the program was to achieve self-reliance in this critical technology and take the benefits to the common man, which was important because valuable resources were being expended by a developing country towards what was considered to be esoteric program akin to a rich nation’s adventure. India’s space program started in the early 1960s with the scientific objectives of exploring the earth’s atmosphere and ionosphere and studying astrophysical objects using rockets. Universities were involved right from the beginning of the program.

The program started off with building and launching sounding rockets for probing the near-earth environment including the upper regions of the atmosphere. They can carry scientific payload, but cannot impart the velocity needed to orbit the payload. A launch vehicle’s final stage provides the necessary velocity to put a payload into orbit.

Then the program moved to building of satellites and launching them on other countries’ launch vehicles. Satellites were used for communication and remote sensing. The first communication satellite was named “Aryabhata” and launched in 1975, named for an ancient Indian mathematician. Remote sensing was based on imaging. It is said, although never officially confirmed, that the images from these satellites were used to track Bin Laden to the Tora Bora mountains.

Next in the evolutionary stage was the development of launch vehicles. SLV3 (Space Launch Vehicle 3) was the first one to launch lighter payloads. Then it moved to ASLV (Augmented Space Launch Vehicle) before settling on PSLV (Polar Space Launch Vehicle) as the workhorse for launching different payloads to near-earth orbits. SRE1 (Satellite Recovery Experiment) brought back an orbiting space capsule to the earth demonstrating re-entry capabilities. There were failures along the way, as is the case with any space program.

Next in the series is the GSLV (Geostationary Space Launch Vehicles). There were early failures so it is still a work in progress. It is a three stage rocket with first stage powered by solid fuel, second by liquid fuel, and the third stage by a cryogenic engine. Fearing India might use cryogenic engines in its missile program, the US tried to discourage other nations like Russia from selling them to India. Politics apart, India has developed its own cryogenic engine. GSLV can place larger satellites and spacecrafts (up to 5000 lbs) into the Geosynchronous Transfer Orbit because of the higher thrust generated by the cryogenic engines,

India’s rockets are launched from Sriharikota in South India. It is the equivalent of the Kennedy Space Center in Florida. Located on the east coast of Bay of Bengal, the space center is named for Satish Dhawan, an ex Chief of the Indian Space Research Organization (ISRO), the Indian equivalent of NASA. ISRO will construct a second vehicle assembly building at the second launch pad at Satish Dhawan Space Center this year, which would increase its launching capacity to 10-12 launches per year.

India’s space program has been a good commercial venture so far. Launching satellites for other countries and selling data from its remote sensing satellites generates revenue. Given India’s low costs, the space business is a good money earner for the country. Of what use is India’s space program for the Indian masses? Last year, a fearsome cyclone struck the east coast of India (hundreds of miles north of Sriharikota). Timely information by the satellite-based early warning system helped in mass evacuations and prevented of thousands of deaths. A logistics exercise by an otherwise listless Indian bureaucracy came in for much praise.

Why go to Moon and Mars? Madhavan Nair, an ex-Chief of ISRO commented “Twenty years from now when space travel is likely to become mundane like airline travel today; we don’t want to be buying travel tickets on other people’s space vehicles”!

Incidentally, a crater on the dark side of the Moon is named for Dr. Sarabhai. Also, India was the first country with whom the US shared samples of moon rocks that Apollo 11 returned to Earth.

This entry was posted in March 2014 and tagged ganti, india, sarabhai, space program. Bookmark the permalink.