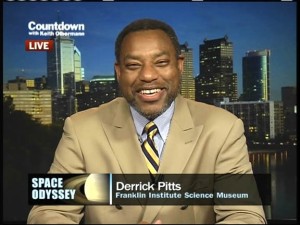 Our next meeting will be on January 14, 2014.  Derrick Pitts, Chief Astronomer and Planetarium Director at The Franklin Institute, will be returning to present a talk entitled “TMT and the Galileoscope: Big Scope for Big Work, Small Scopes for the Most Important Work”. He will pose the question, “With more huge scopes on the horizon to dig deeper into the universe’s secrets, who’s going to operate them if we don’t cultivate a new crop of inquisitive investigators?”

This talk was postponed from the December meeting.

As usual we will meet at 8:00 p.m. in Peyton Hall, 4 Ivy Lane on the Princeton University Campus.   Watch your email for an announcement about a meet-the-speaker dinner.

2014 Astronomy calendars will be for sale again at the meeting.

Derrick Pitts has been associated with the Franklin Institute Science Museum since 1978. Among his positions, Pitts was the original director of the Tuttleman OMNIMAX Theater, and museum vice-president. He has been Chief Astronomer and Director of the Fels Planetarium since 1990, having written and produced more than two-dozen planetarium programs.

He appears regularly on television and radio including CurrentTV, MSNBC, CNN, Comedy Channel’s “Colbert Report” and “The Late, Late Show with Craig Ferguson” on CBS.  For nearly two decades, he has hosted award-winning astronomy radio programs on Philadelphia’s WHYY 91 FM and on WXPN’s “Kid’s Corner”. Pitts recently participated in the first-ever White House Star Party, where he met President Barack Obama and his family.

Among Pitts many awards include the David Rittenhouse Award, the Mayor’s Liberty Bell Award, the St. Lawrence University Distinguished Alumni Award, the G. W. Carver Medal, and Please Touch Museum’s “Great Friend To Kids”Award.  He was inducted into the Germantown Historical Society Hall of Fame, selected as one of the “50 Most Important Blacks in Research Science” by Science Spectrum Magazine in 2004, and awarded an honorary Doctor of Humane Letters degree by LaSalle University.

Future AAAP lectures will be on the second Tuesday of each month: February 11, March 11, April 8, May 13 and June 10.    Speakers and topics will be announced when confirmed.

This entry was posted in January 2014 and tagged meeting announcement, pitts. Bookmark the permalink.