Barnard’s Star is one of the closest stars to us. It is also the star that has the fastest apparent motion across the sky moving about 11 arcseconds per year. With a right ascension of 17h 53m 26s, it reaches opposition on the night of the summer solstice: June 21st.

On each of the three nights, roughly 150 images were taken. Each image was an unguided 8-second exposure. For each night, the best of the images were selected and stacked to make a master image for the night. To maintain astrometric precision, the stacked images were saved in IEEE-float-format fits files. Then, using MaximDL, the three images were aligned to each other using the background stars for the alignment. In the aligned images, the centroid of Barnard’s Star was measured to subpixel level. The centroids so measured turned out to be:

The three stacked and aligned images were then combined with each other to show in one image the relative motion of Barnard’s Star. A closely cropped version of this final stack is shown in Figure 2. Clearly, the proper motion is mainly a north-to-south motion. But, the third image is noticeably off the line that passes through the first two images. Its leftward displacement is due to the oscillatory east-west motion caused by the fact that our Earth is orbiting the Sun. In other words, any east-west displacement is due to parallax. I’ve overlayed on the figure the best-fit proper-motion/parallax path. To find this best sinusoidal path, I started by writing down the general equation for such a path. It turns out to have six free parameters. Matching the x and y coordinates at the three time epochs to the general equation produced six equations. Solving the six equations in six unknowns I was able to determine both the parallax and the proper motion (as well the other four free parameters).

Initially, these quantities were determined in pixel units but I already knew that my telescope/camera combination produces images in which each pixel is 0.575 arcseconds on a side. Converting from pixels to arcseconds, I arrived at my final answer: 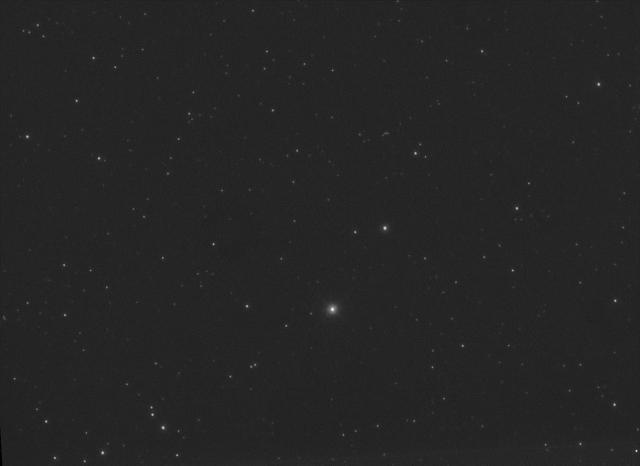 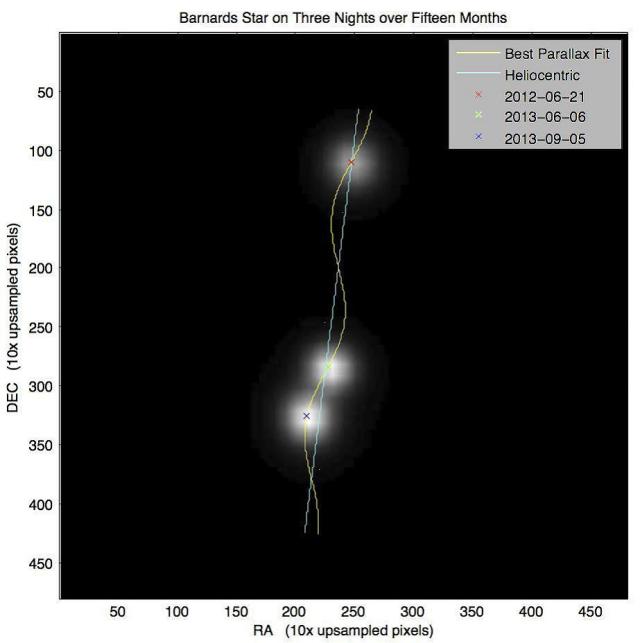 Fig. 2. — After aligning the three images based on the background stars, the three images were stacked and then closely cropped around Barnard’s Star. The cropped image was upsampled by a factor of 10 to produce the image shown here. Also shown is the best fit regression line showing the effect of parallax on the proper motion.

By definition, the distance in parsecs is simply the reciprocal of the parallax and so my measured distance to Barnard’s star is 1.57 parsecs. This result is in the right ballpark of the accurately known distance, which is 1.83 parsecs.

The computed parameters were used to make the overlayed sinusoidal plot shown in Figure 2. Clearly, the computed sinusoid passes through the three data points.

Finally, note that in a previous paper Vanderbei and Belikov (2007) made parallax measurements on the asteroid Prudentia and in so doing were able to measure the astronomical unit in terms of Earth radii. We discovered that 1 au = 23,222 Earth radii.

And, in another previous paper, Vanderbei (2008) measured the radius of the Earth by analyzing the compressed reflection of the Sun on the smooth surface of Lake Michigan during a sunset on a calm summer evening. The result so obtained was
1 Earth radius = 5200 miles = 8400 km.

Again, these numbers aren’t terribly accurate but they are in the right ballpark. Anyway, combining these measurements, we see that the distance to Barnard’s star is

This final answer is pretty close to the known distance of 56.6 trillion kilometers.

It’s pretty awesome to be able to measure these things with this level of accuracy using modest equipment readily available to amateurs everywhere.

I would like to thank Bill Nagel for sparking my interest in imaging Barnard’s star. He has been taking pictures of it every summer since 2007. Maybe at some point we can use a larger collection of images acquired by a number of AAAP members to compute Barnard’s Star’s parallax and proper motion with significantly better precision than was obtained with the three images described here.

REFERENCES
Vanderbei. The Earth Is Not Flat: An Analysis of a Sunset Photo. Optics and Photonics News, November:34–39, 2008.
Vanderbei and R. Belikov. Measuring the astronomical unit from your backyard. Sky and Telescope, 113(1):91–94, 2007.

This entry was posted in October 2013, Sidereal Times and tagged barnard, vanderbei. Bookmark the permalink.