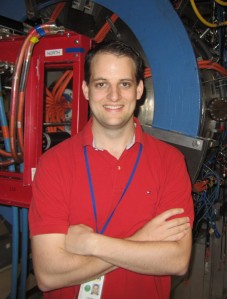 Our monthly lectures will resume on September 10, 2013 with a lecture by Clayton E. Myers of Princeton Plasma Physics Laboratory entitled “The Quest to Understand the Sun and the Space Weather It Produces.” The lecture will begin at 8:00 p.m. in Peyton Hall, 4 Ivy Lane on the Princeton University Campus. Admission is free and the public is welcome. Ample free parking is available across the street from Peyton Hall.

The Sun is a consistent presence in our lives, rising and setting with complete predictability. Upon closer examination, however, there are many phenomena on the Sun that are anything but predictable. The most prevalent are the vast explosions that we call solar flares and coronal mass ejections (CMEs). These events, which are caused by a violent release of magnetic energy stored in the solar atmosphere, spew enormous amounts of particles and magnetic field out into the Solar System. When a solar eruption is directed at Earth, it can have terrestrial consequences that are both beautiful (e.g., the aurora) and hazardous (e.g., the destruction of satellites). Given the increasing dependence of our society on space-based technology, predicting and mitigating the effects of “space weather” is a top priority. 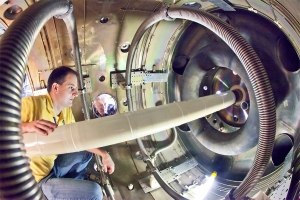 In this talk, he will discuss our current understanding of space weather and the multi-pronged approach that is being pursued to try to improve this understanding. In particular, he will describe the “Great Heliophysics Observatory,” which is the impressive constellation of satellites that are currently being used to study solar activity. He will also describe some of the extensive numerical modeling efforts that are underway with the goal of improving space weather prediction. Finally, he will show how laboratory experiments here in Princeton and elsewhere are beginning to contribute to this effort by providing in situ measurements of solar-relevant phenomena.

Clayton E. Myers is a senior graduate student in the Program in Plasma Physics of the Department of Astrophysical Sciences at Princeton University. For his doctoral thesis research, he is studying the physics of solar eruptions in the laboratory. Originally from rural Ohio, Clayton studied Engineering Physics at Cornell University and graduated Magna Cum Laude with Honors in 2007. He earned an M.A. from Princeton’s Department of Astrophysical Sciences in 2009 and will complete his Ph.D. in early 2014. Since first starting as an experimental plasma physicist as an undergraduate, Clayton has worked in several different laboratories and on a numerical simulation project. In that time, he has studied a variety of topics in plasma physics ranging from high energy density physics to magnetic confinement fusion to his present research in the emerging field of laboratory plasma astrophysics.