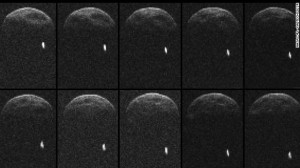 Asteroid 1998 QE2 about 3.75 million miles from Earth. The white dot is the moon, or satellite, orbiting the asteroid.

An asteroid is whizzing past Earth on Friday – and it’s traveling with its own moon in tow.

1998 QE2, as NASA has named it, will not come anywhere near enough to collide with our world. The closest it will come is about 3.6 million miles away – that’s over 15 times the distance to our moon. It will reach that point just before 5 p.m. ET.

But it’s giving astronomers the “best look at this asteroid ever,” NASA said.

The discovery of its moon — which makes it what scientists call a binary asteroid — surprised the astronomers, said NASA radar scientist Marina Brozovic, who helped take the images at Deep Space Network antenna at Goldstone, California.

The complete article may be found at: Large asteroid safely zips past Earth, dragging its moon along 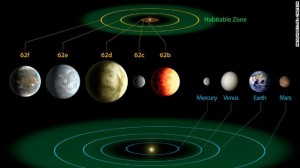 This diagram compares the planets of our own inner solar system to Kepler-62, a five-planet system about 1,200 light-years from Earth. Kepler-62e and Kepler-62f are thought capable of hosting life.

Scientists announced Thursday the discovery of three planets that are some of the best candidates so far for habitable worlds outside our own solar system — and they’re very far away.

The complete article may be found at: 3 new planets

Nearly two years after it was sent up to the International Space Station, a giant particle physics detector has provided its first results in the search for the mysterious “dark matter” believed to be a major component of the universe.

The scientists are studying flux in cosmic rays, the charged high-energy particles that permeate space, for evidence of the invisible dark matter particles colliding with each other, leading to what is termed “annihilation.”

A result of this would be a higher presence of the charged particles known as positrons, the antimatter counterpart of electrons.

The complete article may be found at: Clues to Dark Matter