Antares 1st Blast off from Virginia on April 21 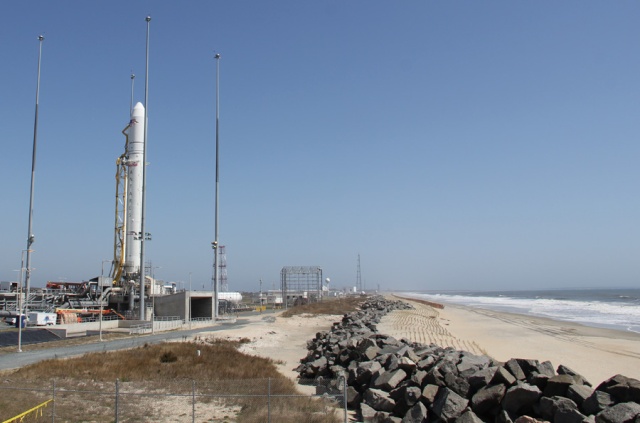 The privately developed Antares rocket built by Orbital Sciences Corp. successfully blasted off on its maiden test flight from the shores of Virginia on April 21 at 5 p.m. EDT from Mid-Atlantic Regional Spaceport (MARS) Pad-0A at NASA Wallops – inaugurating the new commercial space race and delivered a pioneering trio of low cost NASA Smartphone nanosatellites to orbit.

The Antares rocket pierced the cloudless clear blue Virginia skies as the biggest, loudest and brightest rocket ever to launch from NASA’s Wallops Flight Facility. Antares picture perfect liftoff marked the first step in a public/private collaboration between NASA and Orbital Sciences to restart cargo delivery services to the International Space Station (ISS) that were lost following the forced retirement of NASA’s space shuttle orbiters in 2011.

The test flight also signified the first launch from Americas newest space port at Pad-0A. Antares is a medium class rocket similar to the Delta II and SpaceX Falcon 9. The primary goal was to test the Antares rocket and boost a simulated version of the Cygnus cargo carrier – known as a mass simulator – into Earth orbit. A real Cygnus spacecraft will dock at the ISS on the next flight due this summer and deliver cargo and science experiments to the crew of 6 astronauts.

NASA’s Curiosity has discovered a habitable zone that possesses the key ingredients needed for possible alien microbes to once have thrived in the distant past on the Red Planet. The robot found widespread evidence for repeated episodes of flowing liquid water, hydrated mineral veins and phyllosilicates clay minerals on the floor of her Gale Crater landing site after analyz-ing the first powder ever drilled from a Martian rock.

See my new Mars mosaics and an interview with me at Space.com and NBC
http://www.space.com/20862-stunning-mars-panoramas-curiosity-rover.html

This entry was posted in May 2013, Sidereal Times and tagged antares, kremer. Bookmark the permalink.