Curiosity, humankind’s latest quest to find out if we are alone in the universe, soared skyward on Nov. 26 atop a towering inferno. Curiosity is NASA’s newest and biggest robotic surveyor specifically tasked to hunt for the ingredients of life on Mars.

NASA’s Curiosity Mars rover is encapsulated inside the 5 meter payload fairing and loaded atop the Atlas V rocket at Pad 41. Credit: Ken Kremer

Curiosity zoomed to the heavens with a pulse pounding blastoff mounted atop a United Launch Alliance Atlas V rocket at 10:02 a.m. EST from Space Launch Complex 41 on Cape Canaveral Air Force Station in Florida. The 197-ft tall, Atlas booster’s powerful liquid and solid fueled engines ignited precisely on time with a flash and thunderous roar that grew more intense as the expanding plume of smoke and fire trailed behind the rapidly ascending rockets tail. It was a spectacular sky show for the throngs of spectators who journeyed from across the globe to witness the liftoff of the $2.5 billion Curiosity Mars Science Lab (MSL) rover.

The engines powered the accelerating climb to space and propelled the booster away from the US East Coast as it majestically arced over in between broken layers of clouds. The Centaur second stage success-fully fired twice and placed the probe on an Earth escape trajectory at 22,500 MPH and lofted the space-craft out of Earth orbit into a 352-million-mile journey to Mars.

“Our spacecraft is in excellent health and it’s on its way to Mars,” said Pete Theisinger, Mars Science Laboratory Project Manager from the Jet Propulsion Laboratory in California at the briefing. “The launch vehicle has given us a first rate injection into our trajectory and we’re in cruise mode.” 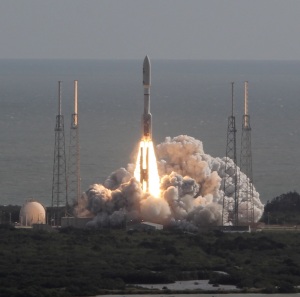 Curiosity’s noble goal is to meticulously gather and sift through Martian soil and rock in pursuit of organic molecules, and clay and sulfate minerals that may preserve evidence of habitats and that could support the genesis of Martian microbial life forms, past or present. The car sized rover is the most ambitious, important and far reaching science probe ever sent to the Red Planet.

“Science fiction is now science fact,” said Doug McCuistion, director of the Mars Exploration Program at NASA Headquarters at the post launch briefing for reporters at KSC. “We’re flying to Mars. We’ll get it on the ground… and see what we find.” “Ecstatic – NASA is Ecstatic. MSL is enormous, the equivalent of three missions frankly.”

Curiosity blasts off for Mars on Nov. 26 from Florida. The car-sized rover has 10 science instruments designed to search for signs of life. Credit: Ken Kremer

Curiosity is a 2000-pound behemoth. She is nearly twice the size and five times heavier than Spirit and Opportunity, NASA’s prior set of twin Martian robots. Curiosity is equipped with a powerful 165-pound array of 10 state-of-the-art science instruments weighing 15 times more than its predecessor’s science payloads. A drill and scoop located at the end of the robotic arm will gather soil and powdered samples of rock interiors, then sieve and parcel out these samples into analytical laboratory instruments inside the rover. A laser will zap rocks to determine elemental composition.

“We are ready to go for landing on the surface of Mars, and we couldn’t be happier,” said John Grotzinger, Mars Science Laboratory Project Scientist from the California Institute of Technology at the briefing. “I think this mission will be a great one. It is an important next step in NASA’s overall goal to address the issue of life in the universe.”
NASA is using an unprecedented, rocket-powered, precision descent system to guide Curiosity to a pinpoint touchdown inside the Gale Crater landing site, with all six wheels deployed. Gale Crater is 96 miles wide. It is dominated by layered terrain and an enormous mountain rising three miles above the crater floor which exhibits exposures of minerals that may have preserved evidence of ancient or extant Martian life.

“I hope we have more work than the scientists can actually handle. I expect them all to be overrun with data that they’ve never seen before. It will be like sitting at the bottom of the Grand Canyon,” said McCuistion.

“Our mission is about looking for ancient habitable environments – a time on Mars which is very different from the conditions on Mars today. The promise of Mars Science Laboratory, assuming that all things behave nominally, is we can deliver to you a history of formerly, potentially habitable environments on Mars,” Grotzinger said.

The liftoff was the culmination of 10 years of effort by the more than 250 science team members and thousands more spread across the United States and NASA’s international partners including Canada, Germany, Russia, Spain and France.

Ken Kremer:  Spaceflight magazine & Universe Today
Ken has a selection of his Shuttle photos and Mars mosaics for sale as postcards and frameable prints.