Our planet Earth orbits the Sun once every year whereas it takes Jupiter about twelve years to complete one orbit. This means that once every thirteen months Earth catches up to Jupiter and passes it in this planetary race around the Sun. When Earth “passes” Jupiter we say that Jupiter is at “opposition”. This year’s opposition happened at 01:41 UT on October 29—just days ago. 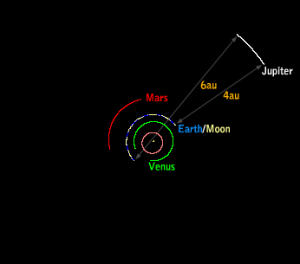 At opposition, Earth lies almost directly between the Sun and Jupiter. As a result, Jupiter is as close to Earth as it ever gets. For this opposition, it was just 3.97 astronomical units (au) away. In other words, it was just a little bit less than 4 times further from us as we are from the Sun. 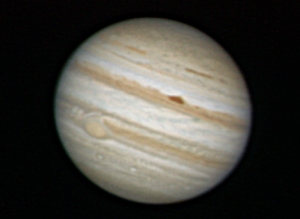 Hence, opposition is the best time to view Jupiter in a small telescope. Shown below is a picture I took of Jupiter just a few days before opposition. In this picture, Jupiter’s apparent size is as big as it ever gets for the particular telescope and camera I used.

To appreciate the changing apparent size of Jupiter, it is interesting to compare pictures taken with the same equipment at different times. Last August I took a picture of Jupiter with the same equipment that I used a few days ago. Shown here are the two pictures side-by-side. Jupiter in late October was clearly bigger than it was back in August. When I took the August picture, Jupiter was 4.50 astronomical units away. Hence, its apparent size was about 12 percent smaller than now as the picture shows.

Comparing apparent sizes of Jupiter. Left one was taken in August, right one in October.

Even though Jupiter is at closest approach right now, it will be an excellent evening object to view over the next several months. Currently, it rises in the east exactly when the Sun sets in the west. About an hour after sunset it is the blazingly bright object low in the east. Most people will think it is just another airplane off in the distance but those of us who know better can tell our friends that, no, this bright object is the majestic planet Jupiter.

For those interested in taking pictures of Jupiter, let me offer some tips. The first and most critical factor is the weather and in particular the “seeing”. In NJ, August tends to have the nights with the best seeing and the night of August 24 was certainly a night of very good seeing. Also, seeing generally improves as the night wears on and the dropping temperature stabilizes a few degrees above dew point.

The second critical step is to make sure that the telescope is at the same temperature as the surrounding ambient air. I took these Jupiter pictures with my 10 inch Ritchey-Chretien from RCOS. It has fans that draw air over the mirror to facilitate a quick cool down. I set these fans at maximum power for about 30 minutes after which the telescope was basically the same temperature as the surrounding air.

While the telescope cools down, I work to get my camera set up. For these Jupiter shots, I used my Canon XSi DSLR camera because there is a third-party software program, EOS Camera Movie Record, that allows me to grab full-resolution real-time video from my camera directly to my computer.

Between the camera and the telescope I inserted a Televue 4x Powermate barlow lens to further magnify the image. Barlow lenses are important when imaging Jupiter and the other planets because, even at opposition, these are small objects that require as much magnification as possible.

To maximize the chance of getting a good picture, I always take several videos each a few minutes in duration. On August 24, I took 15 separate videos. On October 24, I took 16. Between recording each video, I refocus. Because of the variability caused by the seeing, it is very hard to judge when the telescope is in best focus. Hence, it’s best to take several random attempts at it and decide later which was best. 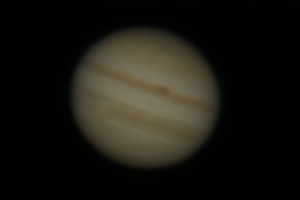 Hazy picture of Jupiter before sharpening

To “process” the videos into a single image, I use a program called Registax 6. Here’s how the October image looked after stacking and before doing anything to enhance the image…

To get from this blurry image to the nice sharp final image shown at the top, I used something in Registax called “wavelet sharpening”. This sharpening tool is really amazing as you can see.

This entry was posted in November 2011, Sidereal Times and tagged astrophotography, jupiter, vanderbei. Bookmark the permalink.