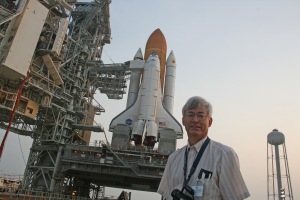 The December meeting will be held on the 8th at 7:30 PM in Peyton Hall. The talk will be by Dr. Ken Kremer of Universe Toady and AAAP. The talk is entitled “America’s Human Path Back to Space and Mars with Orion, Starliner, and Dragon”. After the talk, a selection of Ken’s Space photos will be available for sale.

Prior to the meeting, there will be a meet-the-speaker dinner at Winberies, Palmer Square in Princeton at 5:45PM. This is 15 minutes earlier than the usual start time. If you wish to attend please email program@princetonastronomy.org no later than noon on December 8.

Dr. Ken Kremer will outline NASA’s plans for resuming a human path back to space and the road to Mars from American soil aboard the new Orion and commercial Boeing Starliner, and SpaceX Dragon capsules. Ken will give an inside account of NASA’s development of private astronaut ‘taxis’ to the ISS in Earth orbit and the manned ‘Journey to Mars’ with Orion and the mammoth SLS rocket. He will discuss the critical Dec. 2014 first test-flight of Orion from the Kennedy Space Center and the NASA’s next steps in human spaceflight to the space station and beyond. Ken will briefly update us on NASA’s ongoing Mars rovers, Curiosity and Opportunity, and the upcoming InSight Mars lander and Webb space telescope.