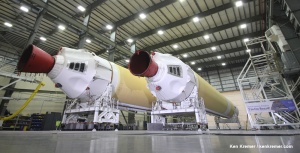 Two of the three first stage boosters comprising the mammoth Delta IV Heavy rocket that will propel Orion to high Earth orbit have arrived at Cape Canaveral Air Force Station, Florida, and were unveiled in mid March by top NASA managers at a media briefing I attended at the Cape.

The triple barreled Delta IV Heavy rocket is currently the most powerful American rocket and the only one capable of launching the Orion EFT-1 capsule to its intended orbit of 3600 miles altitude above Earth. 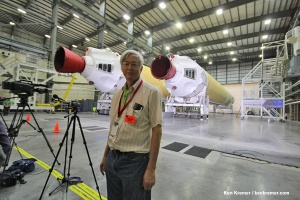 Due to urgent US national security requirements, the maiden blastoff of the unmanned Orion pathfinder has just been postponed three months from September to December 2014 in order to make way for the accelerated launch of recently declassified US Air Force Space Surveillance satellites.

The center and starboard side boosters recently arrived at the Cape aboard a barge from Decatur, Alabama where they were manufactured by United Launch Alliance (ULA).   The remaining port side booster and the Centaur upper stage are due to arrive in mid April.

For more about Orion read my articles here:

The next Antares/Cygnus rocket launch from nearby Virginia to the ISS is tentatively set for May 6 but may be delayed.

This entry was posted in April 2014, Sidereal Times and tagged kremer, NASA, Orion. Bookmark the permalink.