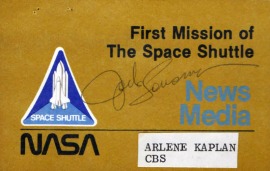 Employed at CBS Television for 40 years put me a somewhat privileged position of occasionally being an eyewitness to history. Whether it was working at a national political convention or an inauguration, the Special Events Unit, which I was part of for a time, covered it all. So why should envy raise its ugly head, and to what deity should I ask forgiveness? I’m not even going to try.

In April of 1981, my wife Arlene, who I fortunately met at CBS in 1968, was assigned to aid in the television network’s coverage of STS-1, the first launch of the Space Shuttle Columbia.

In addition to working alongside Alan Bean, meeting John Glenn and later going on to the Houston Space Center, she met Jack Lousma, a member of the second manned crew on the Skylab space station in 1973 and who would command STS-3. Her assignment was assisting in the control room at the Cape, but her producer offered her the opportunity to go outside to witness the launch live.  What a choice!

We’ve included some memorabilia from that launch, including Arlene’s photograph of the launch. Notice the price of the original souvenir Columbia patch in its original wrapper. 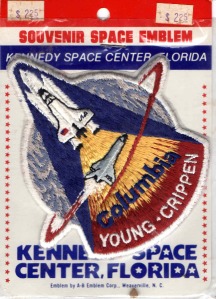 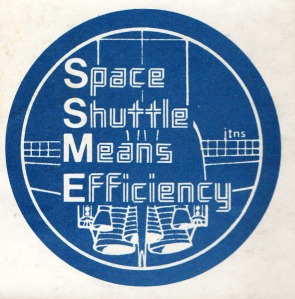 This entry was posted in January 2014 and tagged kaplan, NASA, STS-1. Bookmark the permalink.

1 Response to Reminiscences of STS-1