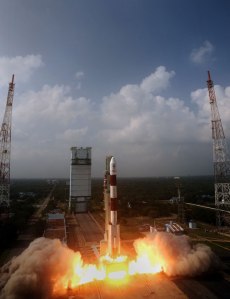 In the wake of the recent launch of MAVEN, the latest NASA mission to Mars, India’s space program is largely unknown to rest of the world, at least in the popular media.  At the beginning of November, India launched a spacecraft atop its Polar Space Launch Vehicle (PSLV). The destination is Mars, which is very challenging even for developed countries like US and Japan and a rapidly developing country like China. By the virtue of the sheer challenge, this launch is another milestone in India’s space history.

Mangalyaan or Mars craft was launched flawlessly and is now orbiting the Earth in a highly elliptical orbit.  The first critical maneuver will be the final boost to fling it towards Mars on December 1, 2013.  The second one will put it in Mars orbit on September 24, 2014. We could lose the spacecraft in either of these times. Until it reaches Mars, India will be waiting with bated breath, watching every day for news that the spacecraft is still alive and on course.  In addition to the bragging rights, the mission will help India get more sophisticated space launch business from other countries. Also, nationalities apart (I am proud of my motherland India and my adopted land US), overall it is good for humanity.

Ever since India launched the Aryabhata satellite in 1975, it has come a long way by building and launching more sophisticated satellites, and developing its own launch rockets with increasing payloads and higher orbits.  There has been no dearth of critics.  Some belittled the achievements by comparing the Indian Space Research Organization (ISRO) with NASA; some questioned India’s economic priorities; and some called India’s competition with China an Asian space race.  Clearly, ISRO cannot be compared with NASA, which has lot more resources and technology at its disposal even in times of dwindling space budgets.  Past space missions have helped India with communications, weather forecasting, and remote sensing and have created a business launching satellites for other countries.  Rather than being a pure science mission, Mangalyaan will add to India’s core technical capabilities.  I do not think Indian’s rivalry with China is a space race.  China is better in some spheres like putting a man in space, but lost the mission to Mars. 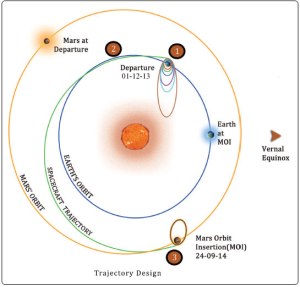 Like my physics professor used to say, we all are “prisoners of gravity”, meaning that Earth keeps us chained to its surface.  Escaping from Earth needs lots of fuel and powerful engines to generate the thrust.  Fuel is most of a rocket’s mass at launch time. By the time the rocket leaves the Earth’s atmosphere, which is about 60 miles above the Earth’s surface, most of its fuel is exhausted.

Most of car-sized Mangalyaan’s mass is its own fuel.  It has its own motors and fuel, separate from that of the launch rocket, PSLV.   The rest of the mass is scientific instruments, antennas, solar panels, etc.  Once in orbit around Earth, the satellite needs very little fuel to maintain its orbit, but the orbit must be adjusted to higher orbits of different shape before slinging it towards Mars. Consider this like an Olympic hammer thrower spinning faster and faster before flinging the hammer.  The spacecraft needs fuel for this purpose.  Once thrown towards Mars, the engines are shut down on the long journey.  Remember that Mars is not stationary during the trip. It is moving around the Sun like the Earth does.  The path which the spacecraft takes is carefully calculated to intercept Mars. 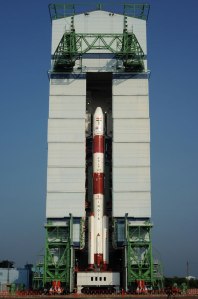 Mangalyaan is spending more time in Earth orbit before going to Mars. It gets incremental boosts during this time because the launch rocket was not very powerful. A PSLV rocket was used, which is meant for low orbit and low payload launches. The Geostationary Space Launch Vehicle (GSLV) is more powerful and can launch heavier payloads to higher altitudes, but there were a string of recent GSLV failures. The next GSLV test is sometime in December.

Once Mangalyaan approaches Mars, in September 2014, the engines are switched on by remote commands from Earth because it must slow down. There are no brakes on its wheels and no wheels either! Fuel is burned to generate reverse thrust to slow it down.  Slowing will enable Mars’ gravity to capture it.  If this capture fails, the spacecraft will fly beyond Mars and end up as space debris.  Mangalyaan does not have enough fuel to try a second capture like an airplane circling an airport and coming back for landing.  Once captured, some minor adjustments are required by burning more fuel.    Scientific observations using the onboard instruments can start after this stabilization exercise.

Mangalyaan will only orbit and will not land on Mars.  Landing is a very complex exercise needing a whole new level of sophisticated technology. Maybe Mangalyaan 2 will do it! 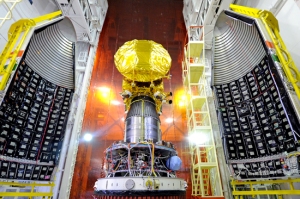 In 2008-09, India successfully launched a lunar orbiter, Chandrayaan-1 or Moon Craft 1, which discovered evidence of water on the moon.  Mangalyaan was developed from technology tested during the Chandrayaan mission.  Five solar-powered instruments aboard Mangalyaan will gather data to help determine how Martian weather systems work and what happened to the water that is believed to have once existed on Mars in large quantities. Mangalyaan will also search for methane, a key chemical which can give clues about existence of life.

Only the European Space Agency, USA and USSR have succeeded so far. Good luck to Mangalyaan!

This entry was posted in December 2013 and tagged ganti. Bookmark the permalink.