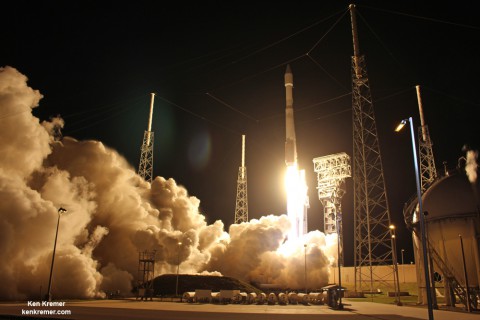 KENNEDY SPACE CENTER, FL –  A stunningly beautiful nighttime launch on March 22 mesmerized delighted spectators as the rocket roared off a Florida space coast, launch pad  stocked with over three tons of science and supplies for the multinational crews working aboard the International Space Station (ISS).

A United Launch Alliance (ULA) Atlas V rocketed raced to orbit from Cape Canaveral Air Force Station  carrying an enlarged Cygnus commercial resupply spacecraft on the Orbital ATK CRS-6 mission to the ISS, as I watched from the roof of the world-famous Vehicle Assembly Building (VAB) where Saturn V moon rockets and Space Shuttles were assembled for launch.

The venerable Atlas V lifted off right on target at 11:05 p.m. EDT from Space Launch Complex 41 into a picturesque moonlit sky. The moon magnificently illuminated the scattered, thin clouds hovering over the seaside launch pad for the hordes of excited folks and families lining the beaches. They were lucky to witness what may be the last launch of a Cygnus from Florida.

After a three-day orbital chase, the Cygnus spacecraft arrived as scheduled  at the station on March 26. Expedition 47 Commander Tim Kopra of NASA and Flight Engineer Tim Peake of ESA (European Space Agency) successfully grappled Cygnus with the space station’s robotic arm and berthed it at the Earth-facing port of the Unity module.

Cygnus was named the S.S. Rick Husband in honor of Col. Rick Husband, the late commander of Space Shuttle Columbia, which was tragically lost with its crew of seven NASA astronauts during re-entry on Feb. 1, 2003.  It was built by Orbital ATK based in Dulles, Virginia. 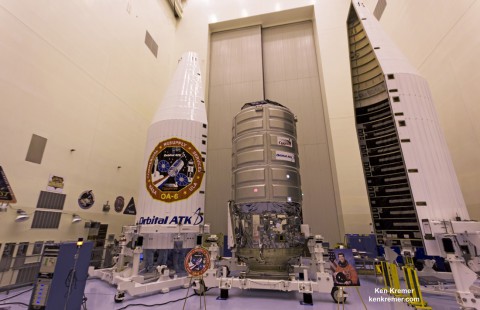 The Orbital ATK CRS-6 mission is the firm’s fifth contracted cargo delivery mission with NASA to the space station.  It was loaded with 3513 kg (7700 pounds) of science experiments and hardware, crew supplies, spare parts, gear and station hardware for the orbital laboratory in support over 250 research experiments being conducted on board by the Expedition 47 and 48 crews.  About a quarter of the cargo is devoted to science and research gear including 1713 pounds of science investigations.

Among the research highlights are experiments like Strata-1, which will evaluate how soil on airless bodies like asteroids moves about in microgravity. Gecko Gripper will test adhesives similar those found on geckos’ feet. Meteor will evaluate the chemical composition of meteors entering the Earth’s atmosphere. Safire will purposely set a large fire inside Cygnus after it unberths from the ISS to examine how fires spread in space, and a nanosat deployer mounted externally will deploy over two dozen nanosats also after unberthing.

Here a cool video prelaunch look at Cygnus and me in the NASA Kennedy Space Center clean room discussing the Meteor experiment by Thaddeus Cesari/VideoShampoo.com:

The next cargo launch to the ISS is set for April 8 with a SpaceX Falcon 9/Dragon vehicle.  Learn all about these and more at my outreach lectures on April 9/10 and April 17 listed below.

This entry was posted in April 2016 and tagged cygnus, kremer, strata-1. Bookmark the permalink.