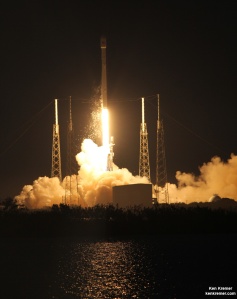 CAPE CANAVERAL AIR FORCE STATION, FL – Commercial space is taking off magnificently in 2013, and I’ve been fortunate to be an up close eyewitness to the hardware and launches in the new commercial space era, reporting for Universe Today.

SpaceX scored a spectacular launch success on Dec. 3 when the history making maiden flight of their upgraded Falcon 9 rocket scorched the evening sky of the Florida Space Coast and successfully delivered a commercial space satellite to geostationary orbit for the first time – thereby revolutionizing the commercial space industry from this day forward.

The Falcon 9 thundered off the pad at 5:41 p.m. EST from Launch Complex 40 at Cape Canaveral soon after sunset as the blistering roar rumbled deafeningly all across the coastal viewing area as I watched in awe.

The 6,918 lbs SES-8 satellite payload is a hybrid Ku- and Ka-band spacecraft that will give TV and communications coverage for Asia.  This new version of the Falcon 9 rocket has nearly 50% more thrust compared to the original Falcon 9. The firms future launch manifest of more than 50 flights worth billions of dollars were riding on a liftoff success.  Read more about the launch and my interview with SpaceX CEO Elon Musk at Universe here and here.

Meanwhile the next Antares/Cygnus rocket built by Orbital Sciences and bound for the ISS blasts off from NASA Wallops (4.5 hours south of Princeton) in Virginia on Jan. 8 at 1:32 PM, having been delayed from December by ISS troubles. Open to the public! See viewing maps in my earlier story here and here .